Who would have won had Abraham not stopped Taylor in the 12th? 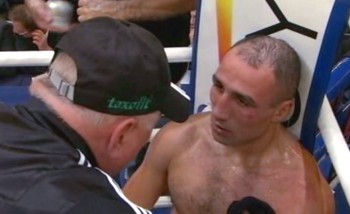 By Jason Kim: Taking away the 12th round knockout from the equation in the Jermain Taylor vs. Arthur Abraham fight, who would have won the fight if it had gone to a decision? I know who I had winning the fight and it wasn’t Abraham. At the time of the stoppage, I had Taylor ahead 6 rounds to 4 with 1 round even. Unless Abraham dropped Taylor a couple of times in the last round, I saw Taylor winning at the minimum of 6 rounds to 5 with one even.

The judges had it scored in favor of Abraham at the time of the knockout, but I can’t see how they could have had Abraham ahead at that point in the fight.

Abraham did next to nothing in rounds one through four, eating a lot of jabs and right hands for the most part. Abraham wasn’t throwing enough punches, a problem he’s suffered a lot from in the past year. He was supposed to have been busier in this fight because he didn’t have to struggle to make the 160 pound middleweight limit, but Abraham looked pretty much the same, as far as I can tell.

Abraham was mostly covering up, and waiting until there was only 30 seconds left in the round before deciding to attack. This is the same way Abraham has been fighting for the past year. That’s not how he used to fight when he was younger. The dude used to attack all the time and didn’t need to play possum for 2 ½ minutes of every round, but that’s what he did against Taylor last Saturday night.

Because of that, I scored rounds one through four for Taylor. In each of those rounds, Abraham averaged 10 punches thrown per round from my count, an anemic number for a top quality fighter, but about the same amount that Abraham has been throwing in his recent fights. He’s all about resting up, and fighting hard for the last 30 seconds. Maybe this keeps him strong so he’s not arm weary.

I can understand that, because knockout punchers like Julian Jackson never threw many punches per round. Instead, Jackson would keep his right hand cocked like a huge cannon and would fire it off like a howitzer every now and then. Abraham’s a good puncher, but he’s nowhere near the same class as a Julian Jackson in terms of punching power, and needs to throw more than 10 punches per round to win rounds.

Taylor badly outworked Abraham in rounds 1-4, 6-8. Even in rounds 9 through 11, Taylor still landed more punches than Abraham might a considerable margin. The difference here is that Taylor was now tired by that point in the fight, his power nearly completely gone on his punches, and his ability to take shots decreased due to the fatigue that set in around the 9th.

However, if Taylor had been able to stay up for the whole fight without going down in the 12th, I have him winning the fight. And maybe that doesn’t mean anything now, since Taylor was knocked out, but it does show that Abraham’s work rate continues to be quite low and unless he improves that for his next fight against Andre Dirrell, Abraham will lose the fight.

Sure, he win by a controversial decision, but that will taint his victory. Abraham won’t be able to get by Andre Ward or Mikkel Kessler throwing only 10 punches per round, if he’s able to somehow get a decision win over Dirrell. I don’t think he’ll get the job done against Dirrell, because he’s going to be much more offensively inclined next time out and throwing a lot of punches now that he’s learned his lesson from the defeat to Carl Froch in their Super Six tournament fight last Saturday night.

« Khan-Salita: Could this bout lead to greatness for Amir?