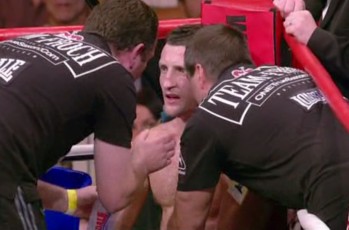 By Nikolaj Ovesen: Last night was the opening of the highly anticipated ´Super Six World Boxing Classic´ tournament. In the opening we saw two former Middleweight champions, Arthur Abraham and Jermain Taylor go up against each other, and we saw current Super Middleweight champion Carl Froch go up against Olympic bronze medalist Andre Dirrell. It was two fights that probably should have been a lot alike, since both fights presented a pressure fighter against a boxing type fighter. However, where one of the fights was beautiful, the other looked more like a street fight. I’ll return to that later.

In my latest article, I stated that one of the beautiful things about this tournament was that each fighter has flaws. Flaws that if exploited, it could change the course of the fight. To sum up quickly: Froch lacks speed and defense, Dirrell lacks experience and Taylor lacks stamina. I only mention three of the six fighters, because Abraham showed that he had no trouble moving up to Super Middleweight, and because the two remaining fighters, Ward and Kessler, haven’t fought yet.

Taylor and Abraham showed us a classic infighter vs outfighter scenario. It was beautiful. Taylor was shredding his jab all night long, while Abraham hid his chin behind his very Tyson like pee-ka-boo defense, and occasionally fired his bazookas at Taylor. I didn’t really learn anything new about Abraham in this fight. He fought his usual way; started out slow, then pushed harder and harder trying to land his bombs. If there were anything about Abraham that caught my eye, it had to be his elusiveness. In the fight we often saw him avoid Taylor’s jabs and straights simply by slipping his head.

News says that after the fight, Taylor was rushed to the hospital where he’s lost some of his short term memory. He’s been asking his trainer which round he was stopped in over and over, and people are nervous that he might have to be replaced by Allan Green.

Up to the fight he put a lot of focus on his problem. He visited doctors and was adamant in finding out the cause of his lack of stamina. Then at the weigh in, he came in almost 2 pounds under the limit, which immediately aroused questions like: Did Jermain mess up his weight? Will he be able to fight for 12 full rounds?

In the fight, he kept firing his jab at a rapid pace, and every time Abraham got close enough, he simply turned him, not allowing him to fire and land his right hand. It’s the game plan that was expected from him. It was the same game plan he had used against Froch and Pavlik. And it worked. Also he answered all our questions concerning his stamina, because he was going full speed all 12 rounds. Loss or not, he did awesome. If Abraham hadn’t caught him with that monster right straight of his, he would have won. Again.

I for one don’t hope he’s going to have to leave the tournament, because after what I saw yesterday, I’m actually confident that Taylor still has a fair chance in it.

The fight between Froch and Dirrell and the one between Taylor and Abraham should have had many similarities, but instead they turned out to be in vast contrast to each other. Carl Froch is a strong fighter who in this bout showed that he possesses more than just heart. He possesses commendable speed and the will to go beyond the rules of boxing. Even to beat a relatively inexperienced Dirrell. There isn’t much new to say about Froch in general. Judging from the fight, he was just anxious to have his dream fulfilled, a dream which sees him as an undefeated champion meeting Mikkel Kessler, in what could be the biggest and toughest fight of his life.

The real star of October 17th is without question Andre Dirrell. What a talent, and what a fighter he could become. Before the beginning of the tournament, relatively little known Andre Dirrell was picked as the biggest loser of the tournament. In the eyes of most people he never stood a chance. Personally I picked him to lose to Froch by an early knockout due to his inexperience. Ironically enough, it probably was his inexperience that cost him the victory. Not because he couldn’t handle a world class fighter, it was more like his ego couldn’t handle the constant bullying from Froch.

In the beginning of the fight Dirrell played around with Froch, using his lightning fast speed to quickly throw a punch or two, and then retreat. It was fast and it was beautiful. I mean I literally moped seeing how he first dodged a shot by Froch, simply by changing from orthodox to southpaw, and then retaliate with a 1-2. That is not something anyone can do. That’s raw talent. I have before said that Andre Ward was only next to Mayweather, when it comes to technique. Well Andre Dirrell is way above even Mayweather when it comes to talent and potential to be great. In my opinion, had he continued like that, he would have won a lopsided victory. However Froch had other plans. He started to get violent. He fouled a number of times, leaving Dirrell looking like an 8 year old who had just been picked on by a Bully. Dirrell touched the canvas a couple of times, and was even wrestled down by Froch, much like Cotto did Clottey. Froch literally took him deeper and deeper into the snake pit, and made Dirrell play his game. From that moment on it was like watching a brawl. Not pretty.

In the end Froch got the victory. I honestly stopped scoring the match before it had gone the time, because it was just not a pretty thing to score. It was easier to keep track of fouls, than it was to keep track of clean hits. But I do think that Froch deserved the win. He did force Dirrell to fight his fight. But from this point on, I’ll start giving Dirrell the credit he deserves, because he’s one heck of a fighter. Personally I can’t wait to Abraham/Dirrell.

« Who would have won had Abraham not stopped Taylor in the 12th?