Canelo Alvarez vs. Dmitry Bivol rematch at 168 for undisputed championship in September

The former four division world champion Canelo (58-2-2, 39 KOs) changed his mind about not wanting to defend his undisputed super middleweight championship in the rematch with Bivol, and it’s easy to see what may have caused him to reconsider his stance.

Bivol could relieve Canelo of his heavy burden

Look at it this way: If Bivol defeats Canelo, he’ll inherit the huge responsibility of needing to defend against the winner of the March 25th David Benavidez vs. Caleb Plant fight, as well as face WBA ‘regular’ 168-lb champion David Morrell.

It’s not like Bivol won’t dominate the Benavidez-Plant winner and Morrell with the same ease as he did Canelo and Gilberto ‘Zurdo’ Ramirez, but it would still be his job instead of Alvarez’s. That would be a weight lifted off Canelo’s shoulders.

Bivol (21-0, 11 KOs) will be the one that will need to deal with hardship this time, coming down in weight to 168 for the opportunity to relieve Canelo of his undisputed super middleweight championship.

That would be a massive feat for Bivol to become undisputed in two weight classes, putting him high in the pound-for-pound lists.

Moreover, it would earn Bivol a ton of money and give him the distinction of having beaten Canelo twice, which has never been done before by any fighter. 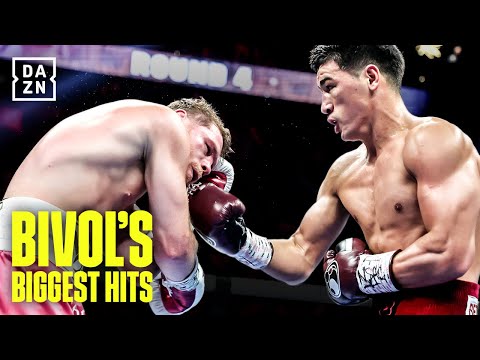 Some would argue that Gennadiy Golovkin deserved victories in his first two fights with Canelo, but he failed to earn the decisions, largely because he was too conservative, attempting to defeat him by throwing mainly jabs and allowing himself to be backed up repeatedly when pressed.

For Bivol to win the second fight with Canelo, he’ll need to pressure him, throw combinations and set a fast pace as he did in their match last May in Las Vegas.

If Bivol is any less aggressive than he was in that fight, he could lose because the judges may give it to Canelo based on him throwing the harder shots and being the one that is coming forward all night.

First, Canelo has a possible overseas fight against John Ryder (32-5, 18 KOs) on May 6th in the Middle East, Las Vegas, London, England, or Mexico. That’s a fight that Hearn also confirmed will happen on that date.

Anthony Joshua’s April 1st opponent to be announced next week »