By Charles Brun: Promoter Eddie Hearn questions whether Tyson Fury really wants the Oleksandr Usyk undisputed heavyweight championship fight because he believes he’s going to be resistant to negotiating a fair deal with him.

Hearn says Fury’s promoters are shopping his fight with Usyk around the Middle East, looking for the biggest site fee possible. Once they get that number, Hearn states Fury will ask how much is in the pot and then insist on taking 70% of that because he’s the bigger name commercially.

As such, Hearn predicts the Fury-Usyk fight won’t happen, and Fury will move on to face someone he can beat but with less to gain because there won’t be a title for him to win.

Fury (33-0-1, 24 KOs) has become his own worst enemy when it comes to making the bigger fights with his hardball tactics, and he could wind up relegated to fight low-level journeymen for the remainder of his career, as we just saw in his last fight against 39-year-old Derek Chisora (33-13, 23 KOs).

“The price of that fight or the price that they’re pitching is a lot of money,” said Eddie Hearn to Boxing Social about the Tyson Fury vs. Oleksandr Usyk undisputed heavyweight clash.

“Wherever you are in the world, you have to deliver value. You can’t presume that people are prepared to overpay for a product. I’m looking at this from the outside. I don’t believe what Fury says. Does he actually want to fight Oleksandr Usyk?

“Is there another fight out there that he definitely wins? Does he actually beat Usyk? He’s quite calculated, Tyson is. I know he says bizarre things, but I think he’ll be thinking deeply about what he’s going to do here. 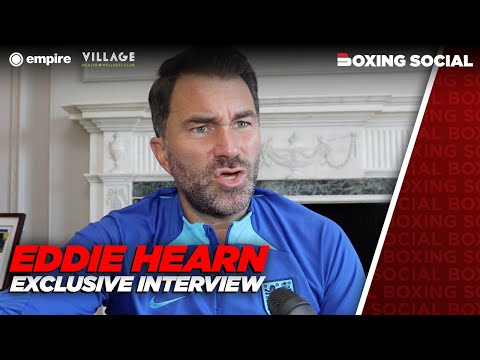 “What’s the split? Tyson Fury is a bigger draw than Oleksandr Usyk. I look at it now. Fury has got one belt, and Usyk has [three]. It’s 50-50 if you want to get the fight made.

“I think in Tyson Fury’s head, he should get 70-30 or 60-40, and I think that could stop this fight from happening because I don’t think Usyk, being the man that he is, will accept less than 50-50 out of principle,” said Hearn.

Unless Usyk is willing to accept what Fury is offering, it sounds like we won’t have a fight between them. Usyk would then move on and likely face Joe Joyce or one of the other top contenders.

“Both sides will be going to every country in the Middle East, trying to get the biggest site fee for this fight,” said Hearn. “Please don’t listen to the bull s**t of, ‘Oh, we’ll go to Wembley.’ No, they won’t be going to Wembley.

“They’re all out at the moment going out to find out who will pay the most money for the undisputed heavyweight championship. Fury will be looking at it, saying,  ‘How much is in the pot?’

“He’ll either say, ‘I accept 50-50. It needs to be 50-50. He’s got three belts, I’ve got one, I’m the bigger name. Whatever, let’s just get the fight made,’ or saying, ‘No, I’m the much bigger fighter than Oleksandr Usyk commercially.’ Correct. But the reality is, this is where fights get stuck.

“If this is me, I’m going, ‘I can make undisputed heavyweight world championship. Yeah, 50-50, come on, boys.’ Then you got to a fighter, and the fighter says, ‘No, I ain’t giving him 50%. Oleksandr Usyk, the little middleweight. He’s never made the money I’ve made. I should be getting 70-30 or 60-40,’ and the whole thing falls apart just like that.

“That’s boxing, and that’s what we deal with every day. It’s quite fascinating, actually. You can’t presume that people are prepared to overpay for a product, especially in this world we live in,” said Hearn.


« Adrien Broner on Hank Lundy: “He knows what he’s in for”

Canelo Alvarez vs. Dmitry Bivol rematch at 168 for undisputed championship in September »