There was a fair amount of roughhousing in the fight, perhaps due to all holding & the showboating that Kelly was doing.

The referee let Kelly get away with rabbit-punching all night. I lost count of all the painful-looking shots Kelly clobbered Williamson with to the back of the head.

#6 WBO, #8 IBF Williamson didn’t like the constant tying up that Kelly was doing, which made it next to impossible for him to land shots. Kelly was on his bike the entire fight, forcing the slow-footed Williamson to follow him around.

When Williamson would catch up to the 2016 Olympian, he would get nailed by a single shot and then immediately grabbed in a clinch to prevent him from throwing anything. 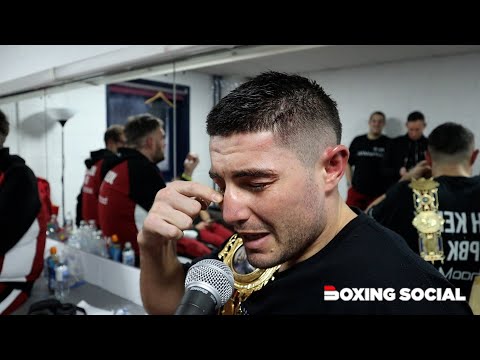 “I just conditioned my legs [in camp] because I knew I had to move,” said Kelly to Boxing Social about his training for Williamson. “Troy is as strong as an ox, so you’re not going to stand there and fight him. You’d be silly to. I knew I had to move.

“I thought this was a breakout moment for me. I’m very proud of my team. Without the team, I wouldn’t be here. We made massive additions. Troy brought the fight and truly believed he was going to get us in the end, and I knew it wasn’t going to be the case.

“To get to where I am now, it shows how much heart I’ve got. When I started moving, I thought, ‘this is the night.’

It was very frustrating to watch because Kelly refused to stand his ground, and he wasn’t about to allow Williamson to get a chance to land his heavy shots.

You can argue that Kelly has learned his lesson from his sixth round knockout loss to David Avanesyan last year in February that he doesn’t possess the power, chin, or toughness to stand and trade with his opponents without getting chopped down.

As such, #11 WBO Kelly has transformed him into a pure spoiler, who moves, potshots, showboats, and frequently holds. From how Kelly fought tonight, he’s going to have major issues against undisputed 154-lb champion Jermell Charlo or former WBO champ Brian Castano.

Kelly is going to need to improve his power because he can’t count on moving for 36 minutes against more talented fighters that know how to cut off the ring. Better fighters like Charlo & Tszyu would cut off the ring on Kelly and chop him up as Avanesyan did.

For Kelly to progress to the next level at 154, he will need to improve his jab, work his power and learn to stand and fight because he’s not going to beat the better fighters in the weight class with the style he has right now.

If Kelly opts to stay at the domestic level, he can carve out an existence fighting against those guys, but his garbage fighting style won’t work against the top guys in the division.

Had this been Sebastian Fundora, Tim Tszyu, Tony Harrison, Erickson Lubin, or Charles Conwell that he was in with tonight, Kelly would have been knocked out.

It would be a good idea for Kelly to return to the 147-lb division where his lack of power won’t be such a liability for him because he’s going to have problems once he begins fighting quality opposition with power.

Thus far, Kelly hasn’t faced anyone good at 154, but he will eventually, and he will run into the same issues as he did against Avanesyan when that happens.