Joe Joyce on Tyson Fury: “I believe I can beat him”

By Scott Gilfoid: Joe Joyce believes he’ll beat Tyson Fury to take his WBC heavyweight title next year. The big 6’6″ Joyce says he’s sparred Fury, and from those sparring sessions, he feels he can’t beat him.

Joyce jumped into the ring last Saturday night to rescue his good friend Oleksandr Usyk when Fury verbally abused him following his win over Derek Chisora at Tottenham Hotspurs Stadium in London.

Usyk was tongue-tied, unable to speak, and getting taking a lashing from Fury verbally. Joyce came to Usyk’s defense and faced off with Fury and let him know that he was ready to fight. Fury’s disposition entirely, and it was obvious that he’d been cowed.

With Fury slowing down with age and putting on additional flab around his midsection, he could be at the mercy of Joyce’s powerful jab and superior inside game.

It’s a fight that Fury would have had a better shot at winning when was younger and sprier, but not now that age is starting to rear its ugly head.

“Of course, I want to fight Fury. It’s a great fight. I’ve had some great rounds sparring, and he’s the best in the division right now,” said Joe Joyce to Frank Warren’s Queensbury, talking about Tyson Fury.

“I’ll fight Fury. He’s a good man, a good fighter. I’d love to take on the challenge. I believe I’d do my very best to,” said Joyce when asked if he’ll defeat Fury. “Yes, I believe I can beat him, yeah.

“I’ve sparred with him, and we’ve had some competitive spars. It’ll be the next level on a stage in an arena. With the skills that he possesses, it’ll be a tricky fight, but I’m a boxer for a reason. I’m competitive, and I want to get to the top and beat the best. So, I’ll fight Fury. 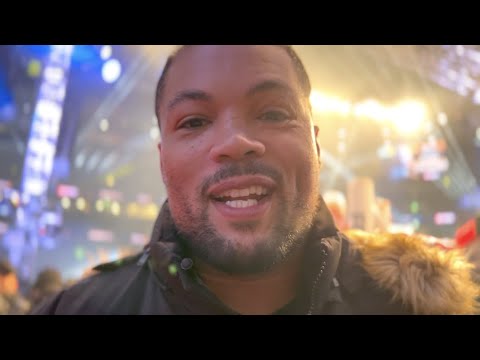 “Yeah, I’m right there [in position to fight for a world title]. At the New Year, I’ll get started with a decent fight. I think this summer will be the time for the proper real-deal main event against Fury, maybe.

“Of course, I want to fight the best. I’m getting in position and lined up nicely for that. There are plenty of fighters that have reached the elite level and plenty of exciting fights.

“Of course, you want to see Joe Joyce against Fury, Joshua, Ruiz, and Wilder. There are so many different names. I’m going to take the strategic route, and whatever comes up, that’ll be the one that I’m fighting.

“Eventually down the line, if it all pans out,” said Joyce when asked if he’d like to fight Daniel Dubois again at some point. “I’ve got some other fights that people want to see first that I want to be a part of, and I want to collect some more of them.

“I want to get a heavyweight title, defend it, and get all the bells & whistles of that,” said Joyce.