By Barry Holbrook: Tyson Fury made it clear last Saturday night that Anthony Joshua isn’t in his plans for his first two fights in 2023.

That’s not to say Joshua won’t get a shot next year if Fury (33-0-1, 24 KOs) fights more than twice, but it’s not looking like he’s going to get the chance to share the ring with him.

Fury wants Oleksandr Usyk next in February or March in a fight that could take place in Saudi Arabia with all four heavyweight titles being on the line. Assuming Fury wins, WBO interim champion Joe Joyce will likely be the next challenger for him.

Joshua (24-3, 22 KOs) may have permanently wrecked his chances to fight with Fury by not speedily negotiating with him for his December 3rd fight.

As of last Saturday night, Fury still seemed pretty bitter about that, and one gets the sense that unless Joshua does some serious groveling, he will not be reconsidered for a fight later.

“They’re both older than Fury,” said Gareth A. Davies to iFL TV about Joe Joyce and Oleksandr Usyk being older than Tyson Fury.

“Joe Joyce vs. Tyson Fury is probably the harder fight for Fury to win. I like the truth tonight. He said that himself, and so did the promoters. That’s a massive Wembley Stadium fight if they can do it there.

“Oleksandr Usyk, Middle East fight. He’s a lot smaller than Tyson Fury, and that’s his problem. He’s going to struggle with the size of Tyson Fury. 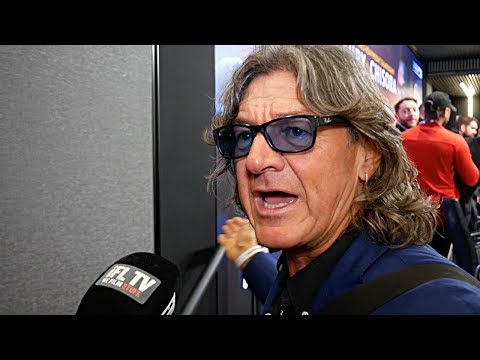 “We know what’s happening now. Fury all week didn’t want to talk about Usyk. He’s switched onto him now. It’s so good to hear that he doesn’t want to retire. That he wants to carry on and have several fights.

“How can you give it up when you walk out to that many people and your dominating opponents? It’s a privilege to be around him.

“Because he’s not around us, he should be at this event. he should be talking to us,” said Davies when asked why Anthony Joshua isn’t in the mix for Fury’s fights in 2023. “The less is more policy is over.

“We want to see him. I’m saying this as a fan of his. As a fan of a guy in the biggest heavyweight fights, who helped transform British boxing over the last ten years.

“At the moment, he’s in the wilderness in my view,” Davies continued about Joshua. “I think he’ll fight Dillian Whyte next. Let’s hear about Anthony Joshua as well. I want to see more of him,” said Davies.


« Joe Joyce on Tyson Fury: “I believe I can beat him”