Jermell Charlo will get stepped on says Terence Crawford

By Adam Baskin: More and more, Terence ‘Bud’ Crawford is planning his future around a mega-fight against undisputed Jermell Charlo at 154 rather than Errol Spence.

Crawford says he’ll move up to junior middleweight to challenge Jermell (35-1-1, 19 KOs) for his undisputed championship in the first half of next year if he still holds the belts after he defends against Tim Tszyu next.

If Charlo loses his titles to Tszyu, Crawford will fight him for the undisputed championship. But first things first, Crawford (38-0, 29 KOs) will defend his WBO welterweight title this weekend against David Avanesyan on Saturday, December 10th, on BLK Prime PPV at the CHI Health Center in Omaha, Nebraska.

After that fight, victorious, Crawford will take a stable at negotiating an undisputed bout with IBF, WBA & WBC welterweight champion Errol Spence Jr.

“Yeah, I really do. That fight can happen next if he hasn’t announced a fight yet. We shall see,” said Crawford to Fight Hub TV when asked if the Errol Spence Jr match can still happen.

“You know what’s going to happen. I’m going to step on him,” said Crawford when asked what will happen when he fights Jermell at 154.

“I feel strong physically, mentally, and emotionally. I’m ready to go out there and have some fun. I never go in there expecting a knockout.

“I’m looking for a victory, and that’s what I’m going in there looking for. I’m making sure my hand is raised at the end of the fight. 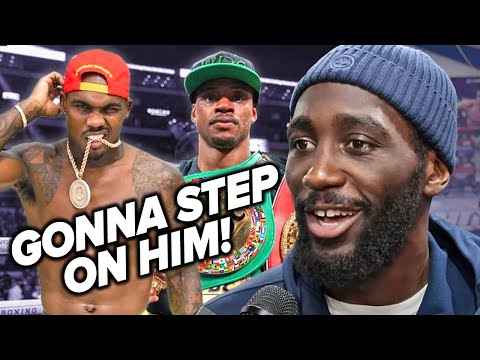 “He’s tricky, he’s tough, he’s durable, he’s always, he’s in shape and always comes to fight. He’s determined, and his will to win is on a ten right now.

“He counters better than a lot of people think. He’s a person that counters real good. We got to be prepared for whatever he brings to the table because he’s a professional boxer, just like myself.

“He’s been around for a long time, and he knows what he’s doing in the ring, just like myself. So we just got to be on our Ps and Qs at times,

“In the first couple of rounds, you feel out a fighter and get to see certain things, and you make your adjustments from there,” said Crawford when asked when he’ll figure out Avanesyan.

“The fans are going to react the way they react. It’s not my job to get caught up in the fans. I’d like to put on a great performance, but at the same time, I’ve got to stick to the game plan and make sure I get the victory.

“It comes from the price of being that good,” said Crawford about Errol Spence and his team being unfair to him in negotiations. “A lot of people view me as the best fighter in the world, and it shows because I’m the fault for everything.

“So me being at fault for everything shows, whether they want to admit it or not, I’m that guy. “I’ve already said everything that needed to be said. There’s nothing else to be said,” said Crawford when asked if he had a counter for them.

“I did what I had to do to try and make the biggest fight in boxing happen. For whatever reason, it didn’t happen, and I’m here now looking forward to fighting David Avanesyan this Saturday.

“You get those times where you’re frustrated with the sport and the politics of boxing, but I got to spend quality time with my family. I still do things outside of boxing.

“I didn’t really have too much have a big effect on me. Some people box because they have to. I’m in the position where I get to box because I want to, and I love the sport,” said Crawford.