By Allan Fox: Trainer/father Derek ‘Bozy’ Ennis says his son Jaron ‘Boots’ Ennis will eventually meet up with Errol Spence Jr to battle him for a belt, be it 147, 154 or 160.

Spence (28-0, 22 KOs) won’t be helping himself by delaying the inventible by fleeing to the 154-lb division to escape having to fight the young lion Boots Ennis (29-0, 27 KOs) that his coming his way looking for his pound of flesh.

Errol is 32 now, while Boots Ennis is a young 25. If Spence makes a run for it by going up to 154, he’s only going to be buying himself a year or so of time avoiding Boots.

At some point, Spence and the aging 35-year-old Terence Crawford will need to mix it up with Boots Ennis, and it would be in their best interest to get it over with nowwhile they’ve got some youth left.

Boots will be fighting Karen Chukhadzhian (21-1, 11 KOs) for the interim IBF welterweightrt title next month on January 7th on the Gervonta ‘Tank’ Davis vs. Hector Luis Garcia card on Showtime PPV at the Capital One Arena in Washington, D.C.

IBF 147-lb champion Spence has four months to defend against Boots Ennis once he gets his hands on the interim belt.

If Errol is going to give up the IBF belt to cut and run for the 154-lb division, he’s going to have to do it in that timeframe if he doesn’t want to face Boots and potentially suffer a humilating defeat.

“The opponent we’re getting now is ranked #4 with the IBF,” said Derek ‘Bozy’ Ennis to ESNEWS about Jaron ‘Boots’ Ennis’ next fight against Karen Chukhadzhian on January 7th in Washington, D.C.

“It’s an IBF eliminator. We’re already mandatory for Spence’s title already. After that, we should be fighting for the world title. He’s got 120 days [4 months] after he fights to sign the contract to fight Boots, or they got to move up. 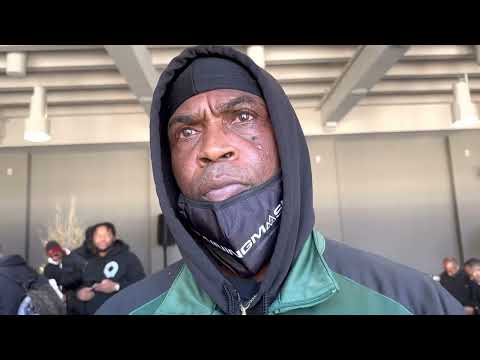 “Now you got Thurman, and he fights Spence. They [Thurman] petitioned the WBC at their last convention to fight Spence. They made him [Thurman] the mandatory, as a matter of fact. So, I guess we have to wait. We were before them, anyway.

“The IBF was before. If you remember, Spence got hurt in the car accident and then his eye. That’s why Spence didn’t defend his title. Like I tell everybody, it doesn’t matter who got the title. We just want to fight for the world title.

“Anybody in the top five. We don’t want to go backward,” said Ennis when asked who he wants Boots to fight in a stay-busy match. We’re right at the door. Whoever we fight next, then we fight for the title. We’re going to get the world title.

“We’re going to meet,” said Bozy when asked if Boots Ennis will still eventually fight Spence if not at 147. If Errol moves to 154 or 160, he’ll still face Boots.

Jermell Charlo will get stepped on says Terence Crawford »