By Jim Calfa: WBA ‘regular’ heavyweight champion Daniel Dubois admits to being out of it after being dropped for the first of three times in round one in his successful title defense against Kevin Lerena (28-2, 14 KOs) last Saturday night at the Tottenham Hotspurs Stadium in London.

The big 6’5″ Dubois’s right knee gave out from under him after getting hit on the head by a lightning-fast left hand from Lerena in the first round.

After that, Dubois (19-1, 18 KOs) found himself on the canvas twice without knowing how he got there.

Lerena had a chance for the coup de grace in the second round, but he surprisingly stayed away and boxed Dubois. By the third round, Dubois’ head had cleared, and he was able to drop Lerena with a straight right.

“Strange, wasn’t it? It was really strange. I pulled through it somehow,” said Daniel Dubois to Frank Warren’s Queensbury about being dropped three times by the unknown Kevin Lerena in the first round last Saturday night. “It was crazy.”

If you’re Dubois’s management team, you’ve got to be concerned about his future because if he’s getting dropped by a former cruiserweight with a 46.7% KO percentage, that’s troubling.

“I think my knee went or something like that. I got caught high on the head,” said Dubois. “After that, I thought, ‘Where is that shot coming from?’ Because I didn’t see it, and then the knee went,” Dubois said about being dropped for the first time in round one by Lerena. 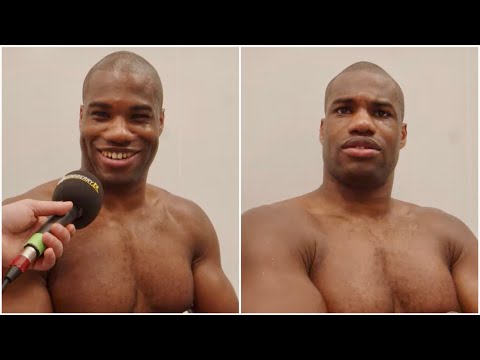 “I recovered quickly and got my senses back together. I don’t know.  In the first round, I don’t think I was really on it. I was there, but I really wasn’t there in my mind.

“When I got knocked down, I got back up, and I like, ‘Right, I’m in a fight,’ and I was awake. It was strange. Yeah, possibly,” said Dubois when asked if he might not have warmed up properly.

“Once after the knockdowns, I felt alright because I was breathing and I was hot, and then I got into it. I’ve got to learn a few lessons after this, for sure.

“I’ve got to have this knee checked out and then work on warming up properly. Being lively and firey because I worked really hard for this fight, but the warm-up let me down a bit. I’ll come back stronger and come back proper on it next time.

“It was pretty weird and pretty strange. I got the victory, and it was a crazy atmosphere. I’m glad I got it done and landed the shots that I did. I’m sure it looked good on TV.

“I must have been [nervous] without even knowing it. I was in a trance-like. After the knockdown, I was out of it. It’s boxing for you. Crazy people.

“The doctor to have my knee checked out. After that, we’ll go back and see. I need more busy again and more activity. I’ve been a bit inactive for a while, and that may have played a role in it as well,” said Dubois.

It was exciting to watch, but this can’t be a good sign for Dubois’ career because there are much bigger punchers than Lerena in the division.