By Brian Webber: Terence Crawford says he would like to fight Errol Spence Jr in London, England, because he believes that they can fill a 60,000-seat stadium over there and make more money than elsewhere, except for Saudi Arabia.

Even if Crawford were right about the British fans being more interested in boxing than in the U.S, it’s questionable whether two non-Brits like him and Spence (28-0, 22 KOs) could fill a 60,000-seat stadium and sell pay-per-view buys even though the fight would be worlds better than the horrible ones Tyson Fury has had recently in the UK against Derek Chisora and Dillian Whyte, both pretty much journeymen-level fighters at best.

Fury can fight a garbageman and fill a stadium in the UK, but it’s doubtful that Crawford vs. Spence would do the same. They’re not British, so the fan won’t come out and support them in huge numbers like they would if the fight were staged in the United States or Saudi Arabia.

“I wouldn’t mind going to London for it,” said Terence Crawford to Thaboxingvoice about a hoped-for fight with Errol Spence next year. “I wouldn’t mind taking it over there.

“You going to make more, though, trust me” said Crawford when told that he would need to pay taxes twice if he fights Spence in London, England. “100%,” Crawford said when asked if he believes he’ll make more money fighting in the UK. 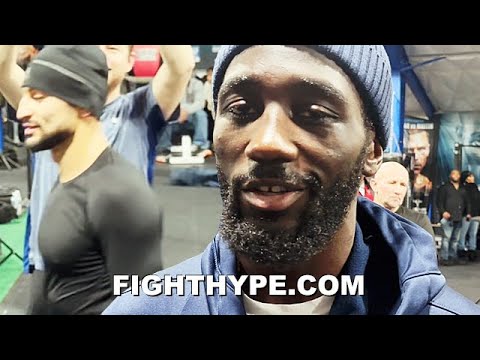 “When you got Tyson Fury and AJ fighting in the UK, and they’re drawing 60,000 people in a stadium, then what does that tell you?” said Crawford.

“When you look at the United States, you go NFL, NBA, baseball, and then maybe boxing. Boxing is way on the downside in the USA supporting boxing.

“You still got to touch it [the $10 million that Crawford will get for the Avanesyan fight]. It’s about both,” said Crawford when asked if he’s looking for a bigger bag or if he’s interested in proving he’s the best welterweight out there.

“100% [not every opponent brings that bag]. That’s why in this game that we play, you got to make the most you can possibly make in your career to solidify yourself for the rest of your life.

“That way you don’t have to go out and get a job or do something stupid like fight until your 45. You got to make the right decisions, be smart with your investments, and don’t spend all your money on materialistic things,” said Crawford.