By Charles Brun: Bob Arum insists Tyson Fury won’t pull a “circus act” and run out of the ring on Saturday night to avoid Oleksandr Usyk if he successfully defeats Derek Chisora at Tottenham Hotspurs Stadium in London.

“That’s stupid bull s**t, and Usyk is a proud guy and is not going to be a part of a circus act. Usyk knows that if Tyson Fury comes through, beating Chisora that the next fight that everybody wants, including Tyson Fury is Usyk,” said Bob Arum to Secondsout when asked if Tyson Fury will agree to a fight with Oleksandr Usyk on Saturday night if he enters the ring after his fight with Derek Chisora, assuming he wins. 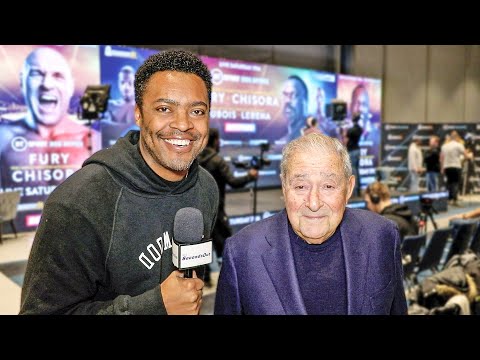 “We’re going to do the fight, one fight. I’m not going to do an Eddie Hearn. Every fight he does comes with a rematch clause. I don’t do that. I come from the school where you don’t do that,” said Arum.

If Fury is going to avoid Usyk for whatever reason and do the same with Anthony Joshua, that limits his options. He can’t keep trotting out Chisora and ramrodding him down the fans’ throats.

As for Fury’s reluctance to discuss a fight with Usyk and his talk of wanting to slap him if he enters the ring afterward, Arum says he wants to stay focused on his fight with Chisora (33-12, 23 KOs).

Let’s hope what Arum says is accurate. It will be a shame if Fury attacks Usyk for entertaining the ring, tearing into him like a pitbull for entertaining his territory and beating up his fight with the journeyman Chisora.

Fury says he doesn’t like that Usyk referred to him as a drunkard recently, and he’s saying he’ll slap him if he sees him at ringside.

Interestingly, there’s a video clip of an inebriated-looking Fury circulating around social media, and that might be the season Usyk labeled him as a drunk.

“No,” said Arum when asked if it’s true what Chisora said about him not wanting him as Fury’s next opponent. “Fury, when he said he was coming back, and we looked around to who the opponent would be. Fury is the one that suggested Chisora.

“No, I’m just a promoter,” said Arum when asked if he’d have preferred a different comeback opponent for Fury. “Tyson Fury is the fighter. The idea that the promoter is the puppeteer is just crazy.

“We’re happy to promoter Tyson Fury’s fights, and we live it up to him as to who he’s going to fight next and when.

“The hold up is that Tyson is not an idiot, and December 4th, you can ask that question,” said Arum when asked what’s the hold up to make the Fury vs. Usyk fight. “You can’t ask this question before December 3rd.

“Chisora can hit him on the chin, and it’s goodbye. He doesn’t want to make a fool of himself by talking about an Usyk fight that doesn’t happen because he got knocked out by Chisora,” said Arum