By Charles Brun: Oleksandr Usyk’s promoter Alex Krassyuk told a defensive-looking Tyson Fury not to lose his fight against Derek Chisora on Saturday at Tottenham Hotspurs Stadium in London.

IBF, WBA & WBO heavyweight champion Usyk (20-0, 13 KOs) wants to ensure that Fury (32-0-1, 23 KOs) doesn’t get beaten and ruin their mega-fight in the first quarter of next year. However, it’s unclear whether Fury will choose to take the fight with the unbeaten three-belt champion.

What’s become increasingly apparent to many boxing fans is that Fury doesn’t want any part of a fight with the 2012 Olympic gold medalist Usyk.

The way that Fury has acted since his war with Deontay Wilder in October 2021, he doesn’t seem to be interested in taking any more risky fights.

Wilder knocked the courage and the ambition out of Fury in that fight because ‘The Gyspy King’ has been risk-averse ever since.

Getting dropped twice by Deontay in the fourth and arguably saved by what many boxing fans viewed as a slow count by the referee has done a number on Fury’s desire to fight quality opposition.

First, Fury was given a gimme against the shot gatekeeper Dillian Whyte, and now the dreadfully poor 38-year-old journeyman Chisora, who has no business fighting for a world title with his 12 losses and recent 1-3 record.

Fury blew the negotiations with Anthony Joshua by setting two silly deadlines, making it clear that he wanted no part of AJ. Now, Fury is showing little interest in fighting Usyk, and he’ll likely wreck the negotiations for a fight against him after he gets by his hand-picked opponent Chisora on Saturday.

“You better win on Saturday,” said Usyk’s promoter Alex Krassyuk to Tyson Fury, telling him not to get beaten by his hand-picked opponent Derek Chisora in their fight on Saturday night in London.

“Don’t worry about me. Worry about yourself,” said Fury in response to Krassyuk’s helpful advice. 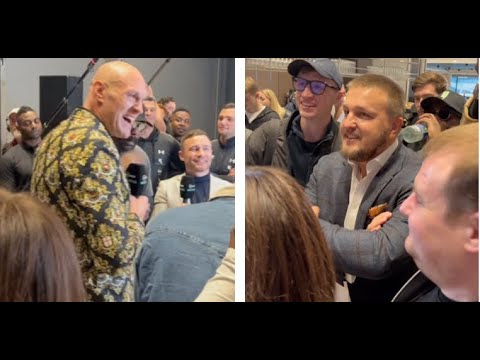 “I’d love to see him do it. I love Delboy; he’s such a good man. I’m so pleased he’s got this opportunity,” said Eddie Hearn to iD Boxing about Derek Chisora challenging Tyson Fury for his WBC heavyweight title on Saturday night in London.

Eddie Hearn: Conor Benn “will be fighting sooner than you think” »