By Brian Webber: IBF/WBC/WBO light heavyweight champion Artur Beterbiev gave his WBO mandatory challenger Anthony Yarde a warning that he’s going to need to “be ready” when they battle next month on January 28th at the Wembley Arena in London, England. Beterbiev vs. Yarde will be shown on ESPN+ in the U.S.

Yarde (23-2, 22 KOs) looked considerably bigger than the unbeaten two-time Olympian Beterbiev (18-0, 18 KOs) when they stood for their face-off at their kick-off press conference.

Immediately after breaking off from a long stare-down, the 37-year-old Beterbiev punched the table standing next to him. Yarde looked over at him and smiled as if knowing what he’ll be up against on January 28th.

This is a big step up for Yarde from the best opposition he’s faced during his seven-year professional career. Yarde’s last three wins: Stefani Koykov, Lyndon Arthur, and Alex Theran.  Yarde lost to former WBO 175lb champion Sergey Kovalev in 2019.

“Yes, of course, I’m angry,” said Beterbiev to Boxing UK, moments after his face-off with Anthony Yarde on the stage. “I’ve heard about it, but it’s not true. I’m just lucky,” Beterbiev said when told that he’s the ‘scariest man in boxing.’ 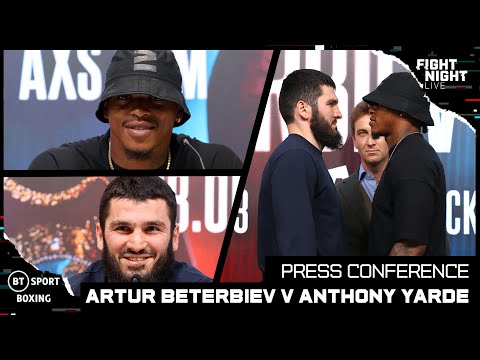 “It’s good fight. I try to be ready for this fight. It’s a good challenge. I respect him. I can’t tell you my strategy that I’m working on because if I tell you, you tell him too.

“We’re going to try to be ready for anything. When it’s crazy time around the world, we don’t have work, and we don’t have pay for work. I’m happy I have work here more.

“We’ll see how it’s going on; we’ll see. I can’t give you a prediction. It’s nonsense. I can’t say anything,” said Beterbiev.

“It’s a mandatory fight. I’m not looking for any names. My target is unification, and that’s it,” said Artur Beterbiev to Boxing Social. “Yes, of course, because it’s boxing. In boxing, anything can happen,” Beterbiev said when asked if Yarde can keep up with him, but we’ll try to be ready for anything too.

“I’m not thinking about what happened in the past. I’m looking to what’s happening in the future. Can you ask me this question after the fight?” said Beterbiev when asked how his fight with the 31-year-old Yarde will play out. “Him too. Ask him after the fight. I never make predictions. I’m regular boxer. I’m not predictors.”