Adrien Broner to fight at 144 for Feb.18th return on BLK Prime

By Allan Fox: Adrien ‘The Problem’ Broner will be fighting at welterweight for his two-year comeback on February 18th on BLK Prime.

Broner (34-4-1, 24 KOs) wants to get a fight under his belt at 144 or 145 in his first fight back from a long 24-month layoff in February and then challenge WBC light welterweight champion Regis Prograis for his newly acquired belt.

AB is currently timing off weight from being out of the ring since February 2021, so he’s taking his time.

BLK Prime is on a re-salvage expedition, signing the 33-year-old Broner to a three-fight, 12-month, eight-figure deal.

Broner will make over $10 million, which sounds like a lot of money, but it’s just s drop in the bucket from what AB can make if he wins all three of his fights with BLK Prime in the next 12 months.

Adrien last fought against Jovanie Santiago, and he did not look impressive. To beat Prograis and some of the other talented fighters at 140, Broner will need to fight better than he showed against Santiago.

“I think it can happen on BLK Prime,” said Adrien Broner to Blueblood Sports TV about his belief that Errol Spence Jr vs. Terence Crawford will happen next year on BLK Prime.

“Coming back, I’ll probably fight in my favorite weight class at 144, 145, or somewhere around that. After that, I’m coming to get that 140 belt from Regis.

“Of course, I’ll be there for my stablemate from BLK Prime,” said Broner about him planning to attend the Terence Crawford vs. David Avanesyan fight on December 10th at the CHI Health Center in Omaha, Nebraska.

“He’s going to do his thing, and I’ve got a big announcement to make,” said Broner about his February 18th fight on BLK Prime.

“Tough, a kid with a lot of talent. He’s a lot of these fighter’s kryptonite,” Broner said about Jaron ‘Boot’s Ennis. “He’s moving in a great path. I think he’ll be world champion soon. 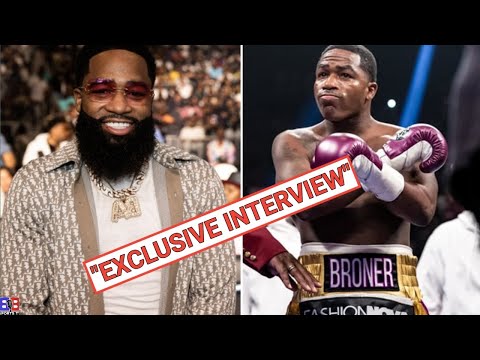 “I don’t think that’s going to happen,” said Broner about a fight between Spence and Keith Thurman. “I know they’re going to try and shove it down [Spence’s] throat. Errol already said it. He’ll never fight Keith Thurman.

“Errol is still mad about that. ‘I’ll never fight Keith Thurman. It’s still a big fight, but when Errol wanted to fight him, they didn’t fight him then. I think what they’re going to do is try and bribe him with more money, though.

“Stay in shape. If I could talk to the younger me. It’s not bad to live your life and have fun, but at some point, it’s important to cut that s**t off and get back to work.

“You can enjoy the fruits of your labor, but don’t forget what made you this star or made you this money and what gave you all this fame and fortune,” said Broner.