Some Boxing facts and feats!

By Ken Hissner: Here, to settle some arguments and start others. You will find some firsts and some interesting facts about boxing in this article!

Boxers whose first fight was for the world title? Jack Skelly was knocked out in the eighth by George Dixon for the featherweight title in New Orleans in September of 1992.

1956 Olympic Gold Medalist Pete Rademacher had heavyweight champion Floyd Patterson on the canvas before being knocked out in the sixth round in Seattle in August of 1957,

Rafael Lovera was knocked out in four by Luis Estaba for the vacant WBC light flyweight title in Caracas, Venezuela, in September 1975.

Novice champions? Saensak Muangsurin won the WBC light welterweight title in his third professional fight; a record Muangsurin had conservable from previous experience as a kickboxer.

Scotland’s Paul Weir won the vacant WBO Mini title in his sixth fight stopping Mexico’s Fernando Martinez, 35-6-2, in seven rounds in Glasgow, Scotland, in May of 1993.

The record number of world title fights was 33, held by Mexico’s Julio “J.C.” Cesar Chavez. The champions with the most title fights were heavyweight Joe “The Brown Bomber” Louis, with 27. 3-division champion Henry “Homicide Hank” Armstrong with 26. Heavyweight champion Muhammad Ali with 25.

The first African heavyweight champion was Gerrie “The Boksburg Bomber” Coetzee, 28-3-1, from South Africa, in September of 1983, knocking out WBA champion Michael Dokes, 26-0-2, in 10 rounds in Richfield, Ohio.

The other South African to win the WBO heavyweight title was Corrie “The Sniper” Sanders, 38-2, who stopped Wladimir “Dr. Steelhammer” Klitschko, 40-1, in 2 rounds in 2 rounds in March of 2003 in Hanover, Germany. 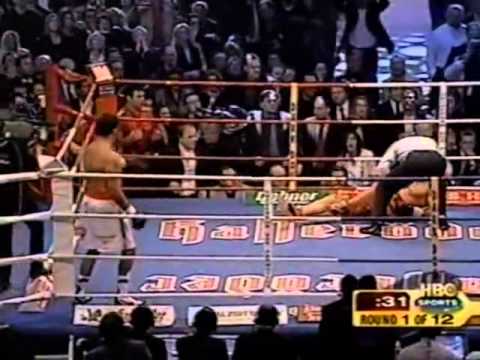 First million-dollar purse? Sonny Liston and Floyd Patterson were each paid $1,434,000 for their heavyweight title rematch in Las Vegas, Nevada, on July 22, 1963.

Fastest world title fight? Daniel Jiminez, 17-3-1, of Puerto Rico, with a 19-second knockout of Harald Geiser, 20-0, of Austria, to retain the WBO super bantamweight title at Weiner Neustadt, Austria, in September of 1994.

Anthony Yarde intends on slugging with Artur Beterbiev on Jan.28th »