Anthony Yarde intends on slugging with Artur Beterbiev on Jan.28th

By Barry Holbrook: Anthony Yarde says he will come out slugging against IBF, WBC & WBO light heavyweight champion Artur Beterbiev when he faces him on January 28th at the OVO Arena in London, England.

Yarde will have a lot of his supporters there on the night, and he won’t have to worry about being the away fighter he was when he fought former WBO 175-lb champion Sergey Kovalev in Russia in 2019.

For Yarde to win, he will need to fight smart and not get caught by one of Beterbiev’s hard punchers. Yarde doesn’t possess the power to brawl with Beterbiev at close range, so he’s going to need to keep the action at medium to long range and keep his chin down.

“January 28 will be my night,” said Yarde about his fight against unbeaten IBF, WBC & WBO light heavyweight champion Artur Beterbiev.

“My destiny playing out in my home city. I won’t make any big predictions, but I am at my best when I fight fire with fire,” said Yarde.

“Tears will literally come to my eyes,” said Yarde’s trainer Tunde Ajayi to iD Boxing about Yarde getting a title shot against Beterbiev. “I always knew that Anthony would challenge and win world titles in the light heavyweight division.

“It’s that payback because we went to Russia, and now a Russian fighter is coming to London. They’re two different fighters,” said Tunde when asked about Yarde fighting Russian fighter Sergey Kovalev in 2019.

“You cannot buy, teach or borrow his experience, and what an experience it was for us in Russia. Gvozdyk said Beterbiev is an overrated puncher and an underrated boxer.

“Anthony has worked his way into this position, and with Frank Warren’s help, he’s given us the home advantage, and it means a lot,” said Tunde.

NEWS:   Anthony Yarde surprised fight was stopped: "They're seeing something I'm not" 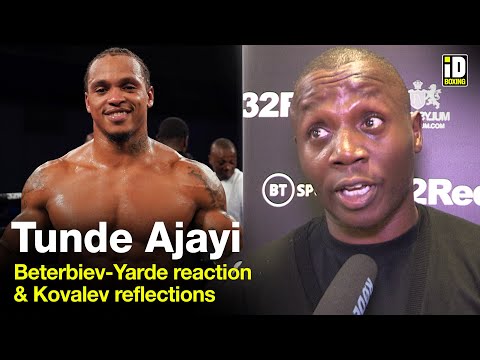 
« Some Boxing facts and feats!