By Craig Page: Eddie Hearn says this week, the commissioner will review the outcome of last Saturday’s fight between Montana Love & Steve Spark and change the outcome from a sixth round disqualification to a “no contest.”

Hearn feels that the referee David Fields made a “poor decision” by disqualifying Matchroom Boxing promoted fighter Montana Love (18-1-1, 9 KOs) for appearing to purposefully shove Spark (16-2, 14 KOs) out of the ring during round six after suffering a cut over his left eye from a clash of heads at the Rocket Mortgage FieldHouse, Cleveland, Ohio.

Hearn says if the results are overturned, he’d like to make a rematch between them. Obviously, Love would be in a better negotiating position if the fight is ruled a no-contest, and it wouldn’t be surprising if it winds up back in Montana’s home city of Cleveland.

Moments before Love showed Spark out of the ring; he’d met with the ringside for him to examine the cut over his left eye. It looked like Love wanted out of the fight, but the doctor let the contest continue. Had the fight been stopped, it would have resulted in a six round draw.

“It was a great fight, and it was turning into a tremendous fight. Obviously, Montana Love gets cut. The ref and the doctor didn’t give me much confidence in the way that they handled that, to be honest with you,” said Eddie Hearn to iFL TV about Matchroom Boxing promoted fighter Montana Love being disqualified for appearing to shove Steve Spark out of the ring in round six.

“He didn’t pick him up, he didn’t throw him out of the ring, and the referee jumped in immediately and crossed his hands [to signal disqualification of Montana Love]. I looked at the referee to say, ‘You disqualified him.’

“Listen, fair play to Stevie because Stevie got up. He landed on his feet, but a lot of people would have rolled around on the floor and thought, ‘This is my way out.’ He wanted to win the fight convincingly, but he didn’t get an opportunity to do so.

Card at the time of Montana Love’s DQ in Cleveland. pic.twitter.com/H6xPJffjUO

“It’s massive for him, but I feel like the ref probably robbed us of two, three, four rounds that would have been absolute warfare because Montana Love had to fight because of the cut.

“I’m disappointed that a good fight could have ended up as a tremendous fight, and although Stevie won, there’s still probably the part of him that thinks, ‘I would have liked to try and finish the job.’ He boxed really well and boxed Montana in the second.

“The doctor got up and looked a little bit lost. They didn’t fill me with tremendous confidence there. The fight went on, and literally 10 seconds later, obviously, Montana is raging, thinking, ‘I got head-butted. I could lose this fight. I need to press the action and go for it.’

“It’s unfortunate they ended up out of the ring, to be honest with you, but I felt like it was a poor decision, and I guess the commissioner will review that video evidence.

“The commission could rule that fight a no-contest. Unlikely, I guess, but it’s been done before. I just feel like it was a poor decision at this level. When you’ve got two guys trying to fight for a world title with everything on the line, I just felt it was harsh,” said Hearn. 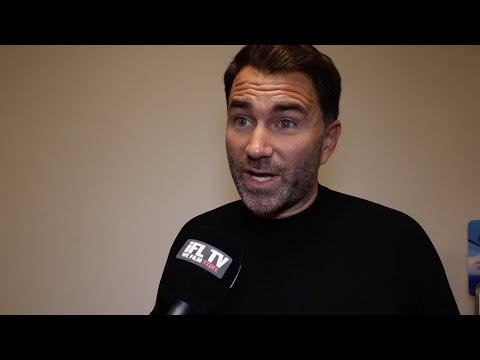