By Craig Page: Gervonta Davis criticized Montana Love last Saturday night in reaction to him being disqualified for pushing Steve Spark out of the ring in the sixth round in their headliner on DAZN at the Rocket Mortgage FieldHouse, Cleveland.

Tank remarked on Twitter after the contest that Love (18-1-1, 9 KOs) had taken the “easy way” out of the fight by losing his cool and shoving Spark (16-2, 14 KOs) out of the ring in the sixth, resulting in referee David Fields immediately disqualifying him for the foul.

Although Love and promoter Eddie Hearn denied it was intentional, the referee stood firm. It wouldn’t have mattered if the referee had changed his mind, the fans saw what happened, and it looked to them like Love intentionally shoved Spark out of the ring.

“That was the easy way out of the fight,” said Gervonta ‘Tank’ Davis on Twitter, reacting to Montana Love being disqualified in the sixth round last Saturday night for shoving Steve Spark out of the ring.

“The fight was warming up to be a good fight. I got the knockdown in the second,” said Spark to YSM Sports Media after the fight. “In boxing, there’s always drama. It went the way it went. I have no ill feelings towards Montana Love.

“I wanted to take Montana into deep water. I won the fight. The head clash, and thrown out of the ring and the DQ. I feel like I was getting on top.

“It’s a fight, isn’t it?” said Spark when asked by an interviewer if his game plan was to “roughhouse” Love. “It’s called boxing, but it is a fight also. Why not try to rough it up? Let’s make it a fight.

“As a fighter, I want the fight to keep going. I can’t argue with the ref. He made a decision, and we have to roll with it. It’s a fight; there’s emotion in it,” said Spark when asked if he believes Montana Love intentionally shoved him out of the ring.

“Once the head clash, we both knew in the back of our heads that if it gets stopped at the end of that round, it goes to the scorecards. So we both wanted to win that round. We came straight at each other. With emotions and two blokes running at each other, things happen.

“I think the right hand that dropped him,” said Spark when asked what was working for him against Love. “The pressure was working, but I had to be intelligent. I couldn’t be too wreckless because he was sharp.” 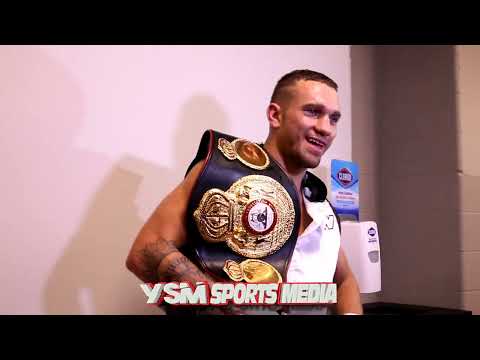