By Brian Webber: Rolando ‘Rolly’ Romero has a secret plan to lure Gervonta ‘Tank’ Davis into giving him a lucrative rematch in 2023.

Romero (14-1, 12 KOs) isn’t saying what his secret plan is, but it’s likely to be a strong social media push in which he trash-talks the inactive secondary WBA lightweight champion Tank Davis (27-0, 25 KOs).

The latter will soon be needy and desperate for a fight due to him sitting on the shelf, losing his popularity for lack of activity and poor quality opposition.

Rolly might not even need to pressure Gervonta, 28, into giving him a rematch, as he’s already checking up on him. On Friday, Tank dropped in on Rolly’s Instagram live session, asking, “How’s your jaw?”

Tank is supposed to be fighting the social media star/boxer Ryan Garcia, but their negotiations have been going at a glacial pace. With all the time wasted negotiating with Ryan, Tank could have already fought.

“I feel great, but in six months, I’m going to ask how his a** is feeling because he’s going to prison, so he shouldn’t be talking too much,” said Rolando ‘Rolly’ Romero to Fighthype, reacting to Gervonta ‘Tank’ Davis posting during his Instagram live.

“I’ve got an idea of how to weave him out,” said Rolly about his hopes for a rematch with Gervonta. “No, no, no, I’m not going to say [the plan to lure Tank Davis into fighting him again], but I’ve got some ideas. He’ll come back out.

“Actually, I’m going to give him some advice real quick. When you’re in there [prison], man, make sure you bring two soaps,” Rolly continued about Tank Davis. “If you bring one and you drop it, it’s an accident. But if you drop them twice, you wanted that s**t.

“Hit me up after you get out. I know you need the money. He needs me; he knows he needs me. He needs to make some money, and he needs me again because I’m the only person.

“That ugly motherf***er actually got lucky. That’s the only thing. He actually said, ‘I closed my eyes and I threw it.’ He was getting his a** beat. He can’t really talk too much. He got lucky, bro. We’re going to get that s**t back.

“Hopefully, he has the balls to take it because the first time, it was kind of forced,” said Rolly about Tank Davis. 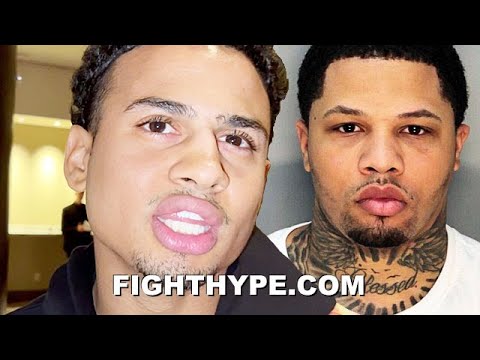