By Brian Webber: John Ryder (32-5, 18 KOs) is poised to get a life-changing money fight against Canelo Alvarez next May following his massive fifth-round stoppage victory over the previously unbeaten Zach Parker (22-1, 16 KOs) in their bout for the vacant interim WBO super middleweight title last Saturday night at the O2 Arena in London, England.

Ryder says he’s ready to challenge Canelo (58-2-2, 39 KOs) for his undisputed championship anyway on earth, but he’d prefer that he comes to the UK so that he could have home advantage.

For Canelo to make that move of traveling to England to defend against Ryder, he’d need to feel confident that he can win because he wouldn’t put himself in the same position as Jermaine Franklin did last Saturday night with his controversial loss to Dillian Whyte in London.

Some boxing fans on social media call the UK ‘the new Germany,’ saying that visiting fighters don’t get a fair shake regarding the scoring of fights.

If Canelo is going to come to England to defend against ‘The Gorilla’ Ryder, he will need to feel that he’s not going to get robbed by the judges if it goes to the cards. Luckily for Canelo, he’s got massive power, and he’s an excellent inside fighter.

As such, if Ryder attempts to crowd Canelo to smother his power, as he did with Zach Parker and Callum Smith, he could get battered by the Mexican superstar.

“It would be massive. He’s a global superstar, and to get him to my hometown would be amazing,” said John Ryder to iD Boxing about his hopes of getting Canelo Alvarez to come to the UK to fight him next following his victory over Zach Parker last Saturday night.

“I’d got to Guadalajara or Acapulco to fight him. Yeah, if it could be made, I’d fight him wherever. To be a potential world champion, but that obviously comes with it,” Ryder said when asked what means more to him, ‘being a world champion or fighting Canelo Alvarez?’ 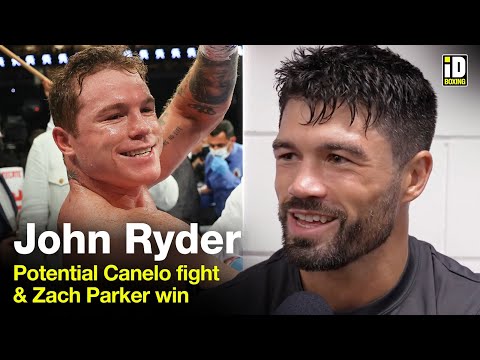 
« Eddie Hearn criticizes fans for saying Whyte vs. Franklin was a robbery