By Robert Segal: Former unified lightweight champion George Kambosos Jr says Gervonta ‘Tank’ Davis will be a lot busier than he normally is if he wants to defeat Ryan Garcia in their 136-lb catchweight fight on April 15th on SHOWTIME pay-per-view in Las Vegas.

Kambosos notes that WBA ‘regular’ lightweight champion Tank Davis (27-0, 25 KOs) has a habit of sitting back, looking for one big punch in his fights against other guys.

Davis, 28, can’t allow Ryan (23-0, 19 KOs) to build up a huge early lead on him, as other fighters have, because he’s got the height & reach to go into cruise control in the second half of the fight to prevent Tank’s attempts to score a fight-saving knockout.

“That’s a great fight. Ryan is a big lightweight, so I think Tank is going to have trouble with the reach, distance, and the speed,” said George Kambosos Jr to Fighthype, previewing the Gervonta ‘Tank’ Davis vs. Ryan Garcia fight.

“Again, we know that Gervonta Davis has that power, that one-punch power, but he’s got to be busy. From round one, he can’t just sit there and wait as he has in the past with these other guys.

“It’s a great fight. I’m going to try and get there and watch the fight as well if they don’t have my fights lined up already. As a fight fan and still a massive name in the division but as a fight fan, it’s a great one,” said Kambosos about the potential Tank vs. Ryan clash in April.

“Ryan Garcia and Gervonta Davis is a great fight as well,” said Kambosos. “I don’t know why they have to have tune-up fights. Why not go straight to it? I never had a tune-up when I fought [Teofimo] Lopez. I went straight to the fight.

“Devin Haney, Lomachenko, all these are huge. I just wish boxing was the best against the best. There’s enough money for everyone. How much money do you need?

“Sometimes too much ego is involved in these big fights, but if you really want to make the fight happen, like me and Haney did, you’ll make it happen.

“The 135-lb division is the best in the world, the biggest names in the world. People want to tune in. That’s what boxing has got to be about.

“So many fights don’t happen, Crawford-Spence. They can’t make it happen because someone doesn’t want to lose their zero. It makes it harder,” said Kambosos. 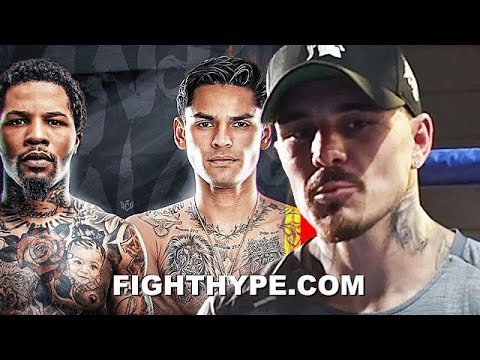