By Barry Holbrook: Promoter Eddie Hearn is excited about having heavyweight Dillian Whyte back under the Matchroom Boxing banner, making his debut with DAZN this Saturday night against Jermaine Franklin, with the chance to face Anthony Joshua in a stadium fight in the first half of 2023, as long as he’s victorious.

Hearn says Joshua (24-3, 22 KOs) will be watching the Whyte-Franklin fight closely, as he wants the rematch with Whyte. Joshua defeated Whyte by a seventh round knockout in a barnburner in December 2015 at the O2 Arena in London.

That was a fight in which Joshua was staggered in the second round and perhaps would have lost had Whyte not re-injured his left shoulder.

Hearn has repeatedly said that if Franklin wins on Saturday, he’ll be the one that faces Joshua next.

“When you talk about names in British boxing, Dillian is right up there. He’s top three, top four, and we’ve worked with him for a long time,” said Eddie Hearn to iFL TV about Dillian Whyte.

“That’s a must-make fight for 2023, in the first half of 2023, provided that Dillian wins on Saturday,” said Hearn when asked if a massive fight between Whyte and Anthony Joshua will be taking place next year in a stadium.

“Like I said, [Jermaine] Franklin wants to gate crash that party. We’ve got Dillian gets the win on Saturday. AJ is going to be watching this fight closely, and he wants to fight Dillian again. That’s a natural stadium fight for 2023.

“We lost the purse bid for the Fury fight, but we wanted to make sure that he worked with us again,” Hearn continued about Whyte.

“Everybody tried to sign him, but we won the race and want to continue that and move forward now to get him a shot at the world heavyweight title.

“I don’t think he did himself justice with that shot [against WBC heavyweight champion Tyson Fury last April], and this is a really important fight for his career.

“So we go back a long way, and we have a lot of mutual respect. We’ve always done things right by each other, and I’m looking forward to seeing him back under the Matchroom banner and making his DAZN debut on Saturday night. 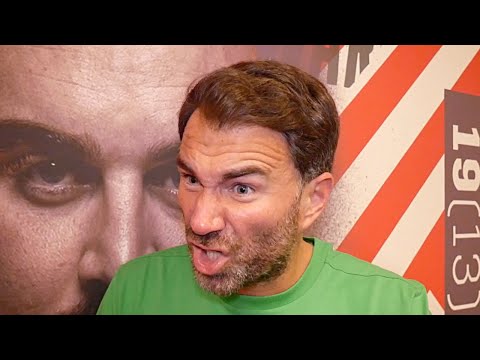