By Brian Webber: Boxing great Sugar Ray Leonard took some time to give pointers to the young lightweight star Ryan Garcia this week, showing him how to throw his lightning-quick snap left hook.

The 1976 Olympic gold medalist and former five-division world champion Sugar Ray showed off his left hook to the unbeaten Ryan (23-0, 19 KOs), helping to improve the main weapon in his arsenal. 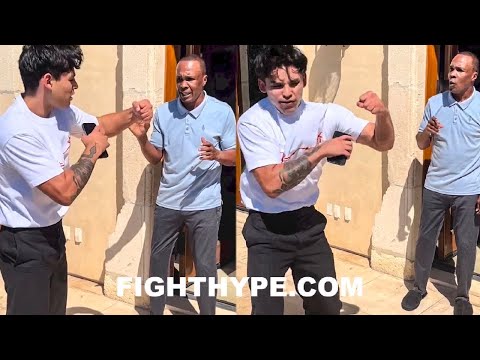 Instead of Leonard helping Ryan with his right hand, which is essentially useless to him, he focused on showing him the snap left hook that he used during his great career.

Some would argue that Ryan’s only weapon is his left hook, as he’s failed to develop his straight left and right hand. Kingry will need to develop his right hand if he’s to have any chance of defeating Gervonta ‘Tank’ Davis in their mega-fight on April 15th on Showtime pay-per-view.

Ryan’s right arm is almost like a vestigial body part, similar to the useless arms of a T-rex dinosaur, as he fails to use it in his fights, which makes him a one-dimensional fighter, similar to past guys like Donovan ‘Razor’ Ruddock and Jeff ‘Left hook’ Lacy.

“Obviously, I would pick Tank to beat him, but it’s still a little bit of a risk,” said Teddy Atlas at The Fight, discussing Gervonta ‘Tank’ Davis’ decision to take a risky tune-up against Hector Luis Garcia on January 7th in Washington, D.C.

“I don’t know why he’s [Tank] taking it. It makes me wonder that the fight [Gervonta vs. Ryan Garcia] ain’t going to happen because why are you taking tune-ups if it is going to happen?

“Although people do take tune-ups. Fighters want to stay sharp. They don’t know when it’s going to happen. They’re talking about the proposed fight not having until April.

“It makes you wonder that they’re [Team Gervonta Davis] taking this fight [with Hector Luis Garcia]. Do they have full confidence that the big mega-fight is going to be made?

“Now, I’m also hearing that Ryan is going to take a tune-up probably in January too. It’s always risky business, and again, it makes you wonder if their fight is really going to happen, but we’re hoping it does happen.

Ray Leonard, one of the greatest

“Sugar Ray Leonard fits into every era. Not everyone does. You had the greatest fighters from the 20s, 30s, and 40s because they fought everybody and they became great fighters. These guys sometimes don’t fight everyone [from this era], and they don’t come quite as great.

“So Leonard, for me, could fight in any era. He’s that good mentally, technically, physically, and with instincts, and handles the pressure. Sugar Ray Leonard is one of the best fighters I’ve ever seen, and he grabbed the moniker of the original ‘Sugar’ man, Sugar Ray Robinson.

“He had almost 200 fights with probably 120 knockouts. Sugar Ray Robinson fought everybody. He could punch, he could box, and he was a pioneer of putting punches together, using his leg work, and taking it to another level back in that era.

“He had one of the greatest chins on top of it. Sugar Ray Robinson, the original ‘Sugar,’ yeah, Leonard took his name, but guess what? He earned it. He won the gold medal in Montreal [Olympics in 1976]. He beat the Cuban [Andres Aldama] that everybody thought was going to destroy him.

“The Cubans at that time had the greatest amateurs in the world, some people would argue. I thought the American team that year in 1976 was the greatest Olympic team of all time. We had five champions.

“He fought for a world title and never won one. He fought twice. In one of them, he might have gotten a little bit of a bad decision. So, yeah, Leonard took the original Sugar Ray nickname, but he earned it, and he made good on it,” said Atlas.