The single most exciting prospect in British boxing, Adam Azim, delivered a barbaric knockout 42 seconds into the 2nd round to a dangerous and experienced opponent in Rylan Charlton.

Azim now moves to 7-0 as a professional, with 6 KOs, and, at only 20 years old, looks destined for superstardom in the sport of boxing. 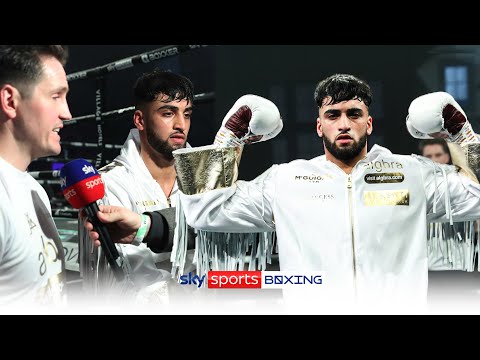 Charlton was saved by the bell in the 1st round, having been knocked down twice and looking seriously hurt, but The Assassin stayed composed, and advanced with cold-blooded determination to make sure Charlton would be unconscious before the round could end.

The sky seems to be the limit for the electrifying Adam Azim, now on a streak of 6 knockouts within the first 3 rounds, with the question now becoming when he reaches the top, not if.

Mikael Lawal forced an experienced, powerful opponent in David Jamieson to retire on his stool after eight hard rounds. Lawal clubbed Jamieson into submission with ruthless hooks to the body and right hands to the head, extending his undefeated record to 17 wins without defeat and claiming the British Cruiserweight Championship.

The fight was a vicious, close-range brawl from the first bell, with both men deciding to happily trade shots throughout the rounds, meaning both hurt each other at different points in the fight.

Jamieson had periods of success in the opening rounds, and used his size and strength to push Lawal round the ring, but slowed in the 7th and 8th rounds as the buildup of damage started to take effect.

Mikael Lawal is now well positioned for huge fights in the red-hot Cruiserweight division in the UK, and looks set to keep knocking opponents out in future.

Shannon Ryan didn’t put a foot wrong in a flawless victory over Ivanka Ivanova, controlling the fight from the first bell until the last. Ryan started the fight boxing perfectly, using the jab to great effect to hit without being hit, Ivanova could do little in response as Ryan managed the distance well and remained evasive.

As the fight progressed, Shannon Ryan began to open up and stay at close range long enough to throw clutches of ferocious hooks to the head and body. Ivanova ended up seriously hurt by the end of the fight and looked to be flagging.

Shannon Ryan hasn’t lost a round in her professional career yet and looks set to keep moving forward and challenge for titles soon in the fast moving world of women’s boxing.

Sam Gilley and Sean Robinson engaged in a technical chess match for 10 rounds that also had the potential for either man to end up unconscious at any moment. Both men had success in the fight and had moments where they had their opponent hurt and pushed forward for a stoppage, with Gilley’s knockdown in the 6th being the closest moment to an early finish in the 30 minute battle

The first few rounds were tense, as both fighters looked for potential openings in their opponent’s defense. However, Gilley started to take control as the fight went on. Gilley’s punches flew freely throughout the fight, and he claimed the centre of the ring and didn’t give it up to Robinson easily.

Robinson was sent to the canvas by a powerful right hand early in the 6th round that seemed to herald the end of the fight, but he showed tremendous heart to get back up and survive the following onslaught from Gilley, who walked down the weakened Robinson down and pounced like a shark smelling blood.

The final 4 rounds were all in Gilley’s favour, as he grew in confidence and varied his offense, working in hooks to the body that slowed Robinson’s movement and forced him to shell up.

Gilley went into the final round knowing he only needed to survive, and boxed wisely to walk away with a unanimous decision victory and the English Super Welterweight title still in his possession.

Hassan Azim gave a measured, intelligent performance with calculated moments of savagery to take a shutout points victory against a dogged opponent in Nestor Amukoto who somehow stayed standing under 6 rounds of heavy assault.

Azim used his jab to perfection throughout the fight, popping it rapidly into Amukoto’s head in barrages. The Hitman managed the range of the fight expertly, bouncing into range and firing off hooks to Amukoto’s head and sliding back out to stop any chance of being hit. Pinning Amukoto in the corner of the ring on multiple occasions, Azim took those opportunities to unload a volley of brutal offense, which came very close to stopping the fight.

Azim, like his brother Adam, looks to be on the fast track to greatness, tearing through the ranks at only 22 years old and without any sign of slowing down. This was just the 5th victory of a professional career that looks set for many more in future.

Michael Hennessy Jr cruised to victory in a smart boxing performance where he used his jab to excellent effect and confidently slipped all of James McCarthy’s best shots. Hennessy wore his down across the five rounds the fight lasted, slowly accumulating damage on McCarthy and forcing the referee to stop the fight.

This was the 2nd stoppage of Hennessy’s career and made a big statement about his future in the sport on one of the biggest stages of his career so far.

Rhys Edwards moved to 13-0 in a perfect points victory where he didn’t lose a second of a round against a tricky opponent in Alexis Kabore and pushed close to a stoppage on multiple occasions.

Edwards used his jab highly effectively throughout the fight, consistently landing it through Kabore’s guard without giving any opportunity for Kabore to respond with offense of his own. The Welsh talent also worked some impressive left hooks into his offense successfully, sinking them into Kabore’s torso with venom.

Edwards started to increase the variety and frequency of his offense as the fight progressed, throwing more straight rights and combinations. Kabore was a skillful opponent, with over 25 professional victories in his career, and challenged Edwards in every round.

Jimmy Lee boxed smartly and evasively on his way to a strong points victory, managing distance well and counter-punching against an aggressive opponent in Jahfieus Faure. Faure came forward every second of the fight, and seemed determined to make the fight a messy battle of strength.

Lee glided around the ring in the third professional fight of his career, avoiding the worst of his opponent’s offense consistently, but not every time. Faure was able to land at times and made Lee work for his victory. At only 19 years old, Jimmy Lee looks set to be a serious star of the future.

Sheffield’s Shakiel Thompson took an impressive stoppage victory in the first bout of the day, breaking down a skilled and defensive opponent in Gabor Gorbics. Thompson chose his shots well, backing Gorbics into the ropes on multiple occasions and finding ways through his tight guard, peppering the head and body. Dr Steel eventually battered his opponent into submission, and the referee was forced to end the fight, putting another stoppage on his undefeated record.

Jeamie TKV moved to 3-0 as a professional in under a round with an aggressive performance where he walked down Joel Ducille, pushed him against the ropes and forced the referee to end the fight. This was the second 1st round knockout in a row for TKV and he looks set to keep on flying in the professional boxing ranks.

George Mitchell secured a shutout points victory and got within touching distance of a stoppage multiple times in a strong performance that made a statement to anyone questioning his ability. Mitchell used his jab to great effect throughout the four rounds and worked in hooks and uppercuts intelligently. Mitchell is now 5-0 and, after this impressive performance, looks set to keep moving through the ranks in future.