By Brian Witter: WBC interim junior middleweight champion Sebastian ‘The Towering Inferno’ Fundora says he will want to knock out undisputed champ Jermell Charlo when it comes time to fight him.

Depending on which mandatory is due after that, Fundora might need to wait as long as 2025 unless Jermell changes his once-a-year fighting routine.

By that point, Charlo will be 35 and let capable of turning back the dangerous 6’6″ Fundora. It’s better for Jermell to fight Fundora as soon as possible because it will get progressively more difficult for him the longer he waits to get this difficult match out of the way.

Fundora will defend his interim WBC 154-lb title against Carlos Ocampo (34-1, 22 KOs) this Saturday night in the main event on Showtime at the Dignity Health Sports Park in Carson, California.

“That’s what we work for. You go in there with a champion, and you know you’re already two rounds behind, so you can’t leave it to the judges,” said Sebastian Fundora to Fighthype about him wanting to knockout Jermell Charlo.

“You have to go there and win it with a fashion where everyone knows you won. The only fashion I see winning is if we get a stoppage win or a knockout win. That’s the only convincing way.

“It’s good for the fans; it’s good for everybody. Maybe we’ll get the real respect that we deserve. That’s how we have to win that fight [against Jermell Charlo].

“I don’t feel pressure from it. I feel it helps me,” said Fundora when asked if he feels pressure that he must win in a dominant fashion each time. “This is what they expect. You can look at it like it’s a pressure type of thing where you’re not losing your O. It’s more motivation where, ‘You got to put on a good show. Put on a good show for the fans,’ and that’s it.

“A talented fighter, very disciplined, a champion,” said Fundora about Jermell Charlo. “I like to fight him. That’s the competitive side of me in boxing. Anybody that comes in my weight class, of course, we want that fight.

“We don’t have to call out names, of course, because it’s going to happen. If you’re the best, we want to fight you, of course.

“That’s the obvious. Everybody wants to do that in this sport. To look at his career, you have to recognize that he’s one of the greats right now,” said Fundora about Jermell. 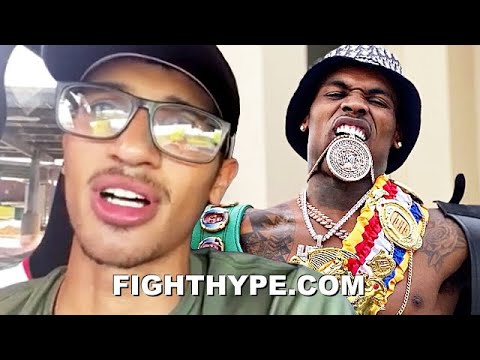