By Adam Baskin: Regis Prograis believes Ryan Garcia would have a chance of defeating Gervonta ‘Tank’ Davis if he boxes him the entire time.

Regis notes that Tank gets hit a lot and was getting outboxed by his last opponent Rolando ‘Rolly’ Romero, before catching him with a big shot in the sixth round. Leo Santa Cruz and Isaac ‘Pitbull’ Cruz both landed many shots on Tank Davis.

Prograis feels that Tank will likely beat Ryan because of his power, and he thinks he’ll eventually get to him at some point in the fight to land a big knockout blow.

Regis has serious doubts whether the 23-year-old Ryan can become a legitimate threat at 140 because there are so many other fighters in the division that can punch.

Ryan will need to make a lot of improvements in his game for his career to go anywhere once he begins campaigning at light welterweight, and it’s questionable whether that’ll happen.

“Could he be? Maybe he can be, but right now, I don’t see it. That’s a good question,” said Prograis when asked who has the higher ceiling at 140, Ryan Garcia or Teofimo Lopez? “It might be Ryan.

“Now he’s come to 140. He beat the dude he was supposed to beat, Campos, but he got hit with a lot of punches, and that dude wasn’t really too much.

“You’ve got some big 140s like myself. You got Jack Catterall, Jose Ramirez, you got [Jose] Zepeda, you got the dude [Subriel] Matias. These dudes are big, strong 140s. Teos not that big in size. I don’t see it happening.

“At least with Ryan, he’s taller and has the potential to put on the bigger frame. That’s a good question, but I would think maybe Ryan. I got Tank,” said Prograis when asked who wins between Gervonta ‘Tank’ Davis and Ryan Garcia.

“I don’t got to think about it. It’s all Tank. Tank has got the power. If Ryan gets hit with that s*** that Tank throws, I think Tank will knock him out for sure. Most of the people think Tank.

NEWS:   Regis Prograis: "I'm better than" Josh Taylor; I want my get back"

“Tank can box, and he’s got that power in both hands. So, in 12 rounds, he’s [Ryan] going to get hit with one of those left hands or one of those uppercuts, and we got to see what happens when he gets hit with that.

“Just box,” said Prograis when asked what he’d tell Ryan Garcia to help him beat Tank Davis. “Ryan is long, and I can’t say if he’s faster than Tank because Tank is fast too.

“But Ryan is definitely quick. He’s real quick. Everybody knows that speed kills. Speed wins the fight. So you can use your speed on him, but you got to get out of there. You got to use your speed because Tank can be outboxed.

“What he would have to do is, ‘You got to hit and move, hit and move.’ The same thing Meldrick Taylor did with Chavez. The question is can Ryan’s chin stand up to Tank? Tank would hit him.

“I think those dudes can get a title,” said Prograis about Devin Haney and Teofimo Lopez at 140. “You know the title is all about the boxing politics, playing the right cards and stuff like that. I think all those dudes can probably get a title.

“Devin has defense, and defense wins championships. He definitely has the better defense out of all of them. We see with Floyd what defense gets you.

“Defense wins championships. Defense makes your career longer. Not taking punches. This is a brutal a** sport. The more punches you take the shorter your career is going to be. So far, he’s [Haney] not taking that many punches.

“That’s going to be a chess-match. I don’t even know, and I can’t even tell,” said Prograis when asked who wins between Haney and Shakur Stevenson.

“They’re both good. I would just favor Devin a little bit more just because he’s bigger, but they kind of got the same style. Both of them are very defensive, and they don’t want to get hit. That’ll just be a chess match the whole time. I can’t even favor Devin with that. I don’t know.

“They kind of got the same style. Devin is an orthodox, and Shakur is a southpaw. It could potentially be a boring fight. It’ll be good for the real boxing heads that really know boxing because it’ll be a chess match and a lot of thinking.

“I don’t think too many big punches will be landed in that fight if it does happen, but I don’t know, bro. I can’t even think. I can’t pick a winner because they both kind of have the same style,” said Prograis about Haney and Shakur. 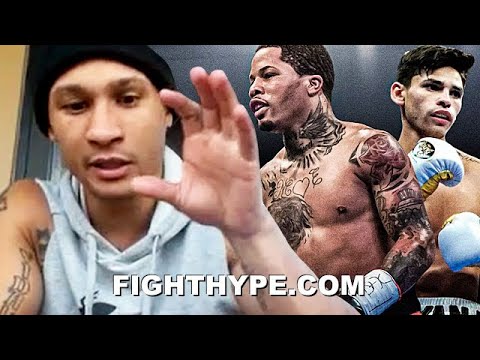