By Ken Hissner: When you look back among the heavyweight champions who seemed to put the fear into their opponents “prior” to the match, it seems two come to mind in “Iron” Mike Tyson, 50-6 with 44 knockouts, and “Sonny” Liston 50-4 with 39 knockouts. Records were very similar at the end.

We can still see the fear in the eyes of former light heavyweight and heavyweight champion Michael Spinks as he did his ring walk. He looked like he was heading to the electric chair about to face Tyson.

Spinks had stopped the unbeaten streak of Larry “Easton Assassin” Holmes at 48-0 to be the first light heavyweight champ to capture the heavyweight title. The rematch may have been deserved by Holmes, but his unbeaten streak was one win away from tying that of Rocky Marciano at 49-0. Afterwards, Holmes said, “Marciano couldn’t wear my jockstrap!” I guess he forgot he lost to Spinks, not Marciano.

When Holmes faced Tyson, it took one left hook on the jaw for Holmes to start looking for a way out of the ring. Holmes was 48-2 and stopped in the fourth round. Ring introductions prior to the match had former champ Muhammad Ali sitting next to Donald J Trump getting called into the ring. He tapped the gloves of Holmes and walked over to Tyson, and whispered something in his ear. Was it “kick his ass?” Holmes had been the only one to stop Ali, whose cut man Ferdie Pacheco quit the corner, saying he should never fight again prior to the Holmes match with Ali.

Liston could put the fear of hell into you when the fighters were being given instructions from the referee before the first round. He had that look in his eyes like, “I’m going to kill you!”

Liston was known to have to most powerful jab in the heavyweight division. He could knock your teeth out with a jab which one of his opponents, Wayne Bethea, found out in the first round not coming out for the second round.

Most boxing people felt champion Floyd Patterson was beaten before their fight when Liston took his title and defended it both ending with first round knockouts.

Liston’s stoppage against hard-hitting Cleveland Williams, 49-3-1 in two rounds was a war with his win over “Big Cat!”

Liston’s back-to-back losses to Muhammad Ali, especially the second, were always in question if it were on the up and up. Mob-connected Liston didn’t seem to take a punch from Ali in the rematch that would have hurt him, let alone drop him for the count.

Though heavyweight contender Earnie Shavers 75-14-1 with 69 stoppages, was considered the hardest hitter in the division though he was also known to run out of gas after five rounds if he didn’t stop you. 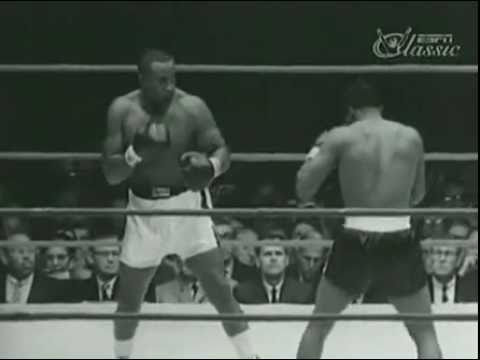