On paper, Bivol is far too quick for Ramirez and the vastly superior combination puncher. In Bivol’s last fight, he totally schooled Canelo Alvarez, making him look one-dimensional last May.

Bivol (20-0, 11 KOs) will not only be dealing with a lot of pressure from the unbeaten WBA mandatory Ramirez, but he’ll be facing a southpaw with cruiserweight size.

The 31-year-old Ramirez is huge for the 175-lb division, and it’s quite apparent that he’s already outgrown the light heavyweight weight class after just five fights since moving up in 2019.

For his last fight at light heavyweight against Dominic Boesel last May, Ramirez rehydrated to 203 lbs after weighing in at 174. That wasn’t just a freak thing. Ramirez looked monstrously big compared to Bivol during the kickoff press conference, and the two fighters looked like they were a weight division apart.

It’s understandable why Ramirez chooses to stay at 175, though, because the cruiserweight division is barren of names. If Ramirez moves up in weight, he will have to deal with killers like Lawrence Okolie, Jai Opetaia, Yuniel Dorticos, A. Goulamirian, and Mairis Briedis.

“It’s an interesting fight. It’s pretty interesting because Zurdo puts that constant pressure on you,” said Buddy McGirt to ESNEWS when asked about his thoughts on the November 5th fight between Dmitry Bivol and Gilberto ‘Zurdo’ Ramirez.

“I’ve never seen anyone put that kind of pressure on Bivol yet. So the key is how is he going to handle it from the southpaw at that,” McGirt said about Ramirez. “He’s big, and he’s busy. He’s throwing punches from all angles.

“That’s a good fight for boxing. It’s going to be interesting,” said McGirt about the Bivol vs. Ramirez fight.

Watching the 6’3″ workout, he looks really slow regarding hand and foot speed. We saw this in Ramirez’s recent fights against Boesel, Yunieski Gonzalez, and Sullivan Barrera.

The speed, such as it was that Ramirez had when he campaigned at 168 from 2013 to 2018, is now gone after his move up to 175 in 2019. Ramirez is very, very slow now that he’s fighting at 175 and basically teetering on cruiserweight. Ramirez has put on too much weight in a short period, negatively impacting his speed. 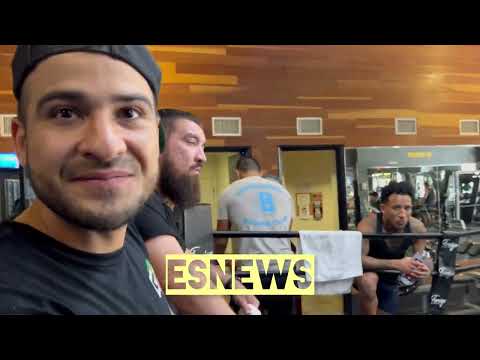 
« “Fury is in the driver’s seat” says Dean Whyte