By Charles Brun: Derek Chisora has received a contract to fight WBC heavyweight champion Tyson Fury for a December clash, says Eddie Hearn. Chisora (33-12, 23 KOs) is another name in the mix for Fury to fight on December 3rd.

The other name that has been bandied about is Manuel Charr; a fighter ranked #19 WBC. Not surprisingly, Hearn sounds disgusted by the whole mess and the huge waste of time for him and Anthony Joshua. 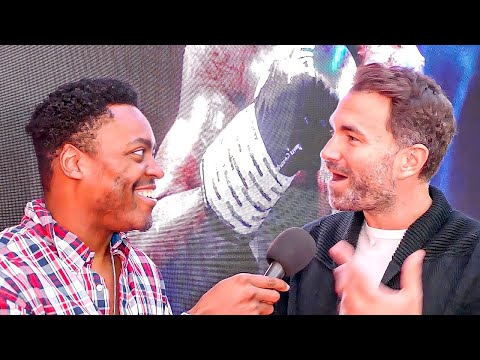 It’s unclear whether Fury is serious about wanting to fight the 38-year-old Chisora. But given how little time there is left before his December 3rd fight, you have to believe that he’s serious about fighting Chisora.

It’s shocking how Fury has wrecked his chances of fighting Joshua by settling two deadlines for the fight. Fury’s promoters should have told him to back off and let them do their job because he’s been a useless third wheel in the talks.

“On Friday, Derek Chisora received a contract for the Tyson Fury fight. So another fighter,” said Eddie Hearn to iFL TV. “So in our mind, he’s [Fury] not fighting Anthony Joshua.”

You got to wonder what the attraction is for Fury to want to fight Chisora. Fury could have his pick of the top contenders in the division, starting with Joe Joyce. He doesn’t need to stoop to the level of fighting Chisora or Manuel Charr.

For Fury to be pooling from the bottom rungs of the division suggests that there’s a confidence issue with him. Perhaps Fury is worried about taking punishment before his February or March undisputed clash with IBF, WBA & WBO champion Oleksandr Usyk.

“Don’t blame Anthony Joshua for Tyson Fury pulling the plug twice on this fight; We’ve sent the final version of the contract back,” said Hearn. “They’ve come back with points, and we’ve been told that the fights off by the man himself.

“AJ is training and is still ready for that date, and we’ll see what happens.

“Bob Arum gave an interview two weeks ago, saying there’s absolutely no chance of this fight happening. Now apparently, there are no barriers, and it’s my fault.

“We always wanted to fight on December 17th. We accepted December 3rd because they gave us terms ultimately on a date they thought we wouldn’t accept. We did accept. We were ready to go.

“We got the comments back on Wednesday. We were never going to sign the fight, and we were told the fights off.

“It’s still there; it’s still open for discussions, but we’re not going to play a game with a bloke that is just coming out, telling AJ, ‘It’s off’ and that he’s a dosser, and he’s got to sign it. Have your fight if you want to fight someone else, and we’ll do our thing and we’ll see what happens.

“Joe Joyce is being used, in my opinion, as sort of a decoy in the whole thing. I said last week that if Tyson Fury is looking for an opponent, why not fight Joe Joyce? It’s the same camp. Joe Joyce is obviously been asked to come out, ‘Yeah, I’m not fighting you, Tyson, but I’ll be ready for AJ.’ It’s bull s****.


« Eddie Hearn says Fury vs. Joshua is OFF!