David Adeleye on sparring Tyson Fury – “It was awkward”

By Barry Holbrook: Heavyweight prospect David Adeleye remembers how awkward Tyson Fury was when he sparred with him for the first time.

The heavy-handed Adeleye (9-0, 8 KOs) says he went out trying to take the fight to Fury immediately and found out how tough it was to land his shots against the 6’9″ fighter.

Eventually, Adeleye figured out the right way to fight Fury, which wasn’t as bad as it initially was.

“I’ll never forget. It was in Vegas, and I was a 1-0 pro. I walked into the gym, and he was wrapping his hands. It was me and two other fighters. So we walked in. He was standing up, and the gym was boiling, literally,” said David Adeleye to iFL TV, recalling the first time he sparred Tyson Fury.

“We hit the bags, and the next day, we sparred. The man was sharp. What you see on TV and what you see in person is two different things. So, I went in there with a certain style, trying to put it on him straight away.

“The boy was slippery, but by the end of camp, I understood how to box, how to use my attributes, see certain things and work on my advantages.

“I literally went for it [in the first spar with Fury]. Obviously, Tyson is top-level, so he weathered the storm. He was trying to slip it. It was a good experience, though. I’ve never sparred with someone as awkward as him. It was an awkward experience.

“I was laughing. I was looking at the boys, ‘This guy is really awkward.’ I knew he was going to be awkward. There are levels. So when I went in there with him, ‘It ain’t going to be nothing.’

“I went in there charging, swinging, and trying to put it on him from the jump. It was good.

“It’s received a lot of criticism. What have they sold, 50,o00 tickets?” said Adeleye when asked about his thoughts on the criticism Fury’s fight with journeyman Derek Chisora has received for their December 3rd fight.

“People are still tuning in to watch it. Derek comes to fight all the time, which is good. Fury has a personality, which is good. It’s good for Derek because he’s giving Derek a chance to fight for a world title.

“It’s good for the British public to see a fight in December because everybody wants to see Fury’s comeback, and he’s here now. He wanted to fight,” said Adeleye. 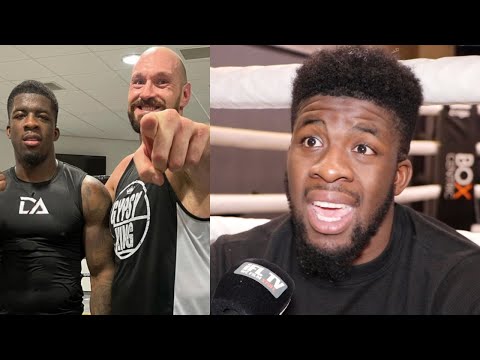 
« Ryan Garcia: “Boxing is boring, nobody wants to fight anybody”