Ryan Garcia: “Boxing is boring, nobody wants to fight anybody”

By Craig Page: Ryan Garcia took to social media to complain about how “boxing is boring” due to the biggest fights not getting made.

Rather than seeing the best fights, fans will need to settle for mismatches involving Terence Crawford and David Avanesyan, as well as Tyson Fury defending against Derek Chisora.

The later fight is a dreadful one of epic proportions, as WBC heavyweight champion Fury (32-0-1, 23 KOs) picked the 38-year-old Chisora (33-12, 23 KOs) over much higher ranked, younger fighters.

What’s surprising is that British boxing fans don’t seem to mind, considering that 50,000 tickets have already been sold for the Fury-Chisora mismatch.

You arguably couldn’t do something like that in the U.S, as fans are a lot more selective about purchasing tickets.

Three examples of the biggest fights not happening are as follows:

“I think Ryan Garcia vs. Tank Davis is the biggest super fight in all of boxing, and both guys Tweeted last week that it’s a ‘done deal,'” said Mike Coppinger to ESPN.

“They both said, ‘Done deal’ at the same time. They were both trying to get a deal done with each other before they move on to the tough part, which is the network side. Ryan Garcia with DAZN, and Gervonta Davis with Showtime.

“It’s going to be tough because, as we’ve seen in the past, how do you get one of those deals done? You need to do a joint pay-per-view, and DAZN and Showtime do not get along. I think it’s going to be a tough road, but they’re trying.”

“I don’t agree with that. I don’t believe Tank vs. Garcia is the biggest commercial fight in boxing, although Ryan Garcia has an enormous social media following,” said Max Kellerman.

“It’s close to ten million followers on Instagram, and obviously, Tank is a star. He packs them in, and he can move fights because he’s a star and he’s excellent. They’re both power punchers.

“If they can do this because they both have economic clout. If they can make this fight happen in spite of the difficulties, that really sends a strong message in boxing. If the fighters want it, then the promoters and the networks be damned. It can happen,” said Kellerman. 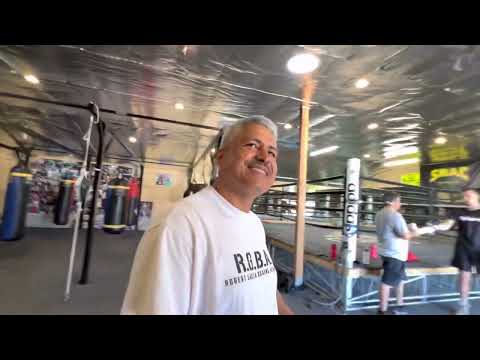 David Adeleye on sparring Tyson Fury – “It was awkward” »