By Sam Volz: Paulie Malignaggi wants to see if undisputed lightweight champion Devin Haney will defend against Vasyl Lomachenko next if he successfully beats Jamaine Ortiz this Saturday night in their fight on ESPN+ at Madison Square Garden in New York.

Malignaggi has already predicted that Haney (29-0, 15 KOs) will vacate his four straps and head north to the safety of the 140-lb division to avoid a sure-fire loss to Lomachenko (16-2, 11 KOs) and then hope to begin again in that weight class.

Top Rank boss Bob Arum obviously won’t be happy seeing Haney vacate the steer clear or Lomachenko because he was looking forward to having the winner of that fight face Shakur Stevenson, as Malignaggi puts it, create a new superstar with the promotional company.

It would obviously be better for Lomachenko to beat Haney because there’s no risk of Loma giving up the belts to move to 140 because he makes weight comfortably for the 135-lb division.

If Haney were to beat Lomachenko, which Malignaggi doesn’t see happening, he could give up the belts rather than face Shakur and then flee to the 140-lb division.

Ideally, Haney will be in the audience on Saturday night and will climb into the ring to tell the boxing world that he will be fighting Lomachenko next.

However, I don’t see that happening. Haney didn’t mention Lomachenko’s name after his win over George Kambosos Jr on October 15th, and I don’t think that was an accident.

You’ve got to feel sorry for Arum if Haney vacates his undisputed 135-lb title because he was hoping that he would stay at lightweight and defend against Lomachenko so that it would set up a mega-fight between Loma and Shakur Stevenson.

Arum signed Haney to a three-fight deal with Top Rank, and all he’s got to show for the two fights thus far are a pair of boring-as-heck mismatches against a terribly poor Kambosos. The real meat & potatoes fight is Haney fighting Lomachenko, but it doesn’t look like that’s going to happen.

If Haney gives up the lightweight belts and then insists that Arum give him a warm-up fight in his debut at 140, then the promoter will have gotten three bad fights in the three-fight contract he gave Devin.

“The question is if Lomachenko does what he’s supposed to do this weekend against Jamaine Ortiz, will Devin Haney take on Vasyl Lomachenko the way that Bob Arum has already stipulated the way he’s supposed to after beating George Kambosos in the rematch,” said Paulie Malignaggi on Pauly TV.

“Remember, I said this from the beginning that he’d [Haney] would beat Kambosos twice and then vacate instead of fighting Lomachenko.

“I’ve also shown you all the proof in this video that it was not anyone ducking Haney but the other way around. Not that it should matter because if Haney wasn’t selling the wolf tickets, it wouldn’t have mattered because for a young fighter that is talented and coming up the ladder, it’s okay for him not to fight all the top guys right away.

“He gets there little by little, which is what Haney did. As we saw now, he’s the undefeated lightweight champion. My problem was the wolf tickets that he was selling, pretending that the top guys, the established guys, guys that had proven their worth, were ducking him when he was nobody at the time.

“If I question your character, then I probably got to go with Lomachenko stopping you because you, my man, were pretending to be a title-holder when you knew you weren’t, and unfortunately, with people like that the first sign of difficulty, they fold like beach chairs. 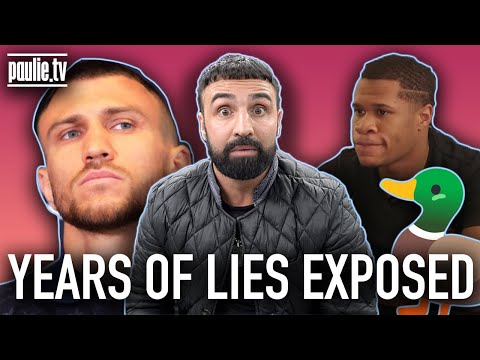 
« David Adeleye on sparring Tyson Fury – “It was awkward”