By Charles Brun: Derek Chisora is annoyed that Tyson Fury has been talking 24/7 this week about the Anthony Joshua fight that failed to happen.

Fury spent a good portion of the kickoff press conference last Thursday talking about Joshua and how he lacked the courage to fight him.

Instead of Fury (32-0-1, 23 KOs) staying on message, focusing on promoting his December 3rd fight against the British journeyman Chisora (33-12, 23 KOs), he continually brought up Joshua.

It’s important that Fury take advantage of his time with the media by trying to build interest in his fight with the 38-year-old Chisora because this fight needs building.

It’s got to be especially bad for Chisora because he getting heavily criticized by the media, and Fury wasn’t helping him by spending so much time focusing on talking about his bitterness towards Joshua for failing to quickly sign a contract to fight him.

You could tell that Fury had totally abandoned Chisora to the wolves and was going to keep the conversation in the safe territory by speaking about Joshua.

It was a weak move by Fury, but he probably was overwhelmed by the negative reaction from the press toward his hand-picked opponent Chisora. Having John Fury there to defend Tyson’s choice of Chisora would have been fun.

You can only imagine the amount of anger John would have shown while battling the media to explain Fury’s decision to defend against the played-out old bottom-feeder Chisora instead of fighting a quality opponent from the top ten in the division.

The Fury-Chisora trilogy match might not need building in the UK, as boxing fans will greedily scoop tickets and purchase the fight on BT Box Office pay-per-view regardless of Fury fighting a lower-ranked fighter, but elsewhere in the world; it definitely needs all the hype it can get.

“AJ is living in Tyson’s head rent-free,” Chisora told Sky Sports. “Tyson wakes up every day thinking about AJ and cannot do an interview without mentioning AJ.

“AJ is off living his life, doing his own thing. I don’t know why Tyson keeps talking about AJ.

“AJ could not take the fight because there were so many complications with sponsors and promoters.

“The fighters always want to fight, just fight, but the complications come from the business people around them who get in the way.” 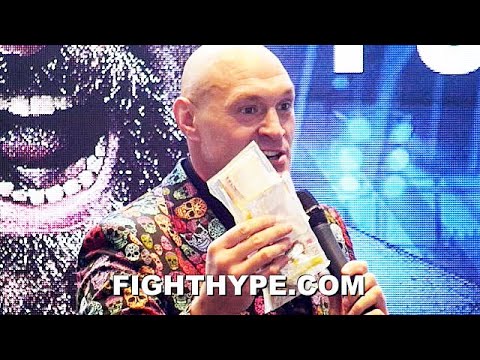