By Dan Ambrose: David Benavidez is mad at Canelo Alvarez after he criticized him for only fighting one world champion in his career.

Benavidez (26-0, 23 KOs) says it doesn’t matter if he only fought one world champion. He still feels he’s more than good enough to defeat undisputed super middleweight champion Canelo, and he wants his title shot now.

In his efforts to force Canelo to fight him, Benavidez, 25, has won two world title eliminators and the WBC interim 168-lb belt.

Despite all that, the sanctioning bodies have been slow in ordering Canelo (58-2-1, 39 KOs) to defend against Benavidez, which could indicate that they’re afraid that he’ll vacate their belt.

At some point, the World Boxing Council is going to have to order Canelo to fight Benavidez because it’s going to start looking like they’re giving him preferential by protecting him from the ‘Mexican Monster.’

“I won two title eliminators and the interim [WBC] belt. That’s the fight that everyone is talking about,” said David Benavidez to Fighthype when told that Canelo Alvarez said that he hasn’t accomplished much in his career and only won one title.

“Who cares if I fought one world champion? If I’m so easy, like he says, then come beat me. Mike Tyson wants to see that fight, Juan Manuel Marquez, Chavez; everybody wants to see this fight.

“Why would he come up with some of this bull s***, ‘I’m not going to fight another Mexican fighter. His whole career, he’s fought nothing but Mexican fighters. The only Mexican fighter that people want to see him in the ring against is me, and the only other one is Zurdo [Ramirez]. I’m starting to get pissed off.

“All I have to do is keep winning, and the fight is eventually going to happen [with Canelo]. I’m going to be extremely ready for when that happens.

“Him, Caleb Plant, Charlo, all these guys, I can run through them. I know that I have what it takes to beat all those guys. I feel like I can beat Canelo now, but what he has over everybody is experience.

“So if I beat these three guys are in my way [Jose Uzcategui, Caleb Plant, and David Morrell Jr], I’ll feel more confident of getting a victory with Canelo.

“I think he’s [Canelo] going to be out for the next year, so it’s going to be me and Uzcategui, Caleb Plant, and then Morrell. If I beat all those guys, who else is Canelo going to fight at 168? Unless he vacates all the belts, there’s no one else left for him to fight.

“The walls are closing in. A lot of trolls say, ‘All he wants is a payday. He wants a handout.’ I’m #1 with the WBC. I just want what was given,” said Benavidez. 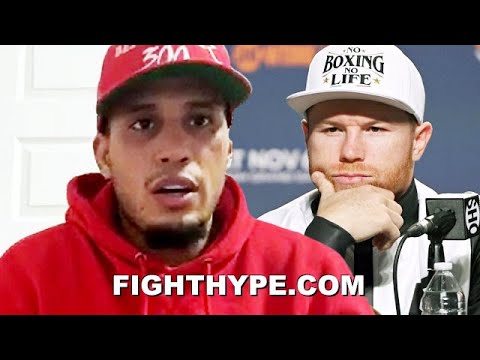 
« “No one wants to see” Crawford vs. Avanesyan says Eddie Hearn