BLK Prime’s Signing Of Adrien Broner Could Persuade Other Boxers

By Vince Dwriter: Approximately one week ago, the majority of the boxing community wasn’t aware of the existence of a company known as BLK Prime, but now the new player in the fight game has made headlines by striking deals with a man who is at the top of the pound-for-pound rankings, and another man who is a former world champion in four different weight classes.

While the world was waiting for a deal to be ironed out for a super fight between WBO welterweight champion Terence “Bud” Crawford and WBC, WBA, IBF welterweight champion Errol Spence Jr, the man who was designated as the B-side of the event made an A+ move by going in a different direction and securing an 8-figure payday.

In a shocking turn of events, On October 20, Terence Crawford confirmed to ESPN that he had signed a contract to fight WBO No. 6 ranked contender David Avanesyan (29-3-1, 17 KOs) on December 10 in his hometown of Omaha, Nebraska. The fight will be streamed live on BLK Prime for $39.95.

This announcement caught everyone off-guard because they were fixated on the Spence-Crawford fight, and they had no knowledge of the existence of BLK Prime. The December 10 event featuring Terence Crawford will mark the first time the platform will stream a professional boxing event.

BLK Prime is a Silicon Valley-based tech company that has been in existence for five years, and they have streamed several non-professional bouts. At first glance, it seemed like Crawford and the streaming service had a one-time deal in which Terence Crawford gains leverage for his negotiations with Spence, and BLK Prime finally receives notoriety as a figure in the background of boxing’s promotional landscape.

The perception of BLK Prime has quickly changed from a company trying to be a prospect to a platform striving to become a major contender. Five days after announcing their allegiance to Terence Crawford, BLK Prime announced the signing of former four-division world champion Adrien Broner.

After canceling his scheduled August 20 bout with Omar Figueroa Jr due to mental health issues, it appeared as though Broner’s boxing career was up in limbo. The man known as “The Problem” was thrown a major lifeline as he successfully secured a three-fight deal with the streaming platform that is worth an estimated $10 million.

The signing of Adrien Broner has shaken up the boxing community because it represents a motion that reflects how BLK Prime is attempting to establish its position in the fight game. During a recent interview with Fighthype, Adrien Broner confirmed the strategic move.

“I think with myself, with my About Billions brand and BLK Prime, I think we gonna take over boxing, and we’re going to reach heights that’s never been done before. And it’s all gonna start with my stablemate from Nebraska… Terence Crawford.”

The deal with Terence Crawford is big, but the Broner signing could produce the evolution of BLK Prime. Adrien Broner (34-4-1, 24 KOs) is a former four-division world champion, and he’s one of the biggest personalities in the sport of boxing, but inside of the squared circle for his past five fights, Broner has compiled a record of (2-2-1).

The acquisition of Adrien Broner has the potential to be a game-changer because it could lure other talented boxers to BLK Prime. For example, if they’re willing to pay $10 million to sign Broner for a three-fight deal, what type of money would they agree to dish out for a current champion such as undisputed lightweight champion Devin Haney or WBA (Regular) lightweight champion Gervonta “Tank” Davis?

In a matter of days, BLK Prime has transitioned from a fly-by-night operation to a major player in the game. The Broner deal has sparked the awareness of boxing fans, but it has also grasped the attention of other high-level boxers and blue-chip prospects who may be seeking a better alternative for their professional boxing careers. 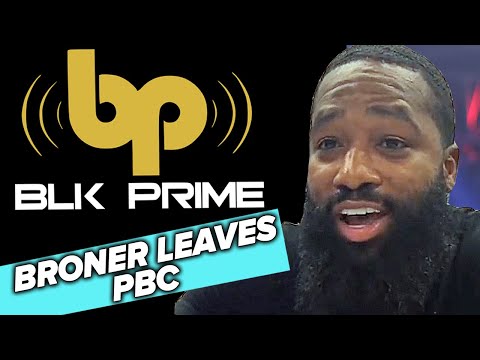