By Charles Brun: Tyson Fury took to social media today to let Anthony Joshua know he has until 5:00 p.m. to sign the contract to fight him on December 3rd, or he’s moving on.

If Fury is serious about his 5 pm deadline, it means he could already have a deal set up for his plan-B opponent Manuel Charr for the December 3rd.

Eddie Hearn believes that Charr is the guy that Fury has wanted all along. Look at it this way. Fury (32-0-1, 23 KOs) has a very tough fight ahead of him in February or March against IBF, WBA & WBO heavyweight champion Oleksandr Usyk.

If Fury is still licking his wounds from a December 3rd battle against Joshua, he’s not going to be 100% for the Usyk fight, and will end up getting beat.

But if Fury chooses a gimme opponent in Charr, he can win that fight without even suffering a scratch, and he’ll be ready to face Usyk in early 2023 without being half-stunned the way he would if he fought Joshua.

Whether AJ wins or loses against Fury, he’s going to take his pound of flesh from that fight. If Fury thought he had it bad getting dropped four times in his three fights with Deontay Wilder, it’s going to be equally bad fighting Joshua because he’s going to put him down as well.

“Today is D-day, people. Are you going to sign the contract, you big p****y, or you not going to sign it?” said Tyson Fury on social media in sending a message to Anthony Joshua.

“When Wilder sent me the contract for Wilder 1, I signed it in 24 hours because I wanted to smash his face in. You’ve had the contract ten days now, b***h, and still ain’t signed it,” said Fury.

“If it’s not signed by five o’clock today, GK’s is moving on,” said Fury.

Tyson is going to look silly if Joshua still hasn’t signed by 5 pm. If this is just a bluff on Fury’s part, fans aren’t going to trust him. They’re going to see Fury as just a big troll, who says stuff to get attention from the fans & media.

If Fury does choose to move on as he says, you kind of have to respect him because he’s going to be walking away from a mountain of dough. It would also be a sign of weakness because he’ll likely be facing Charr. 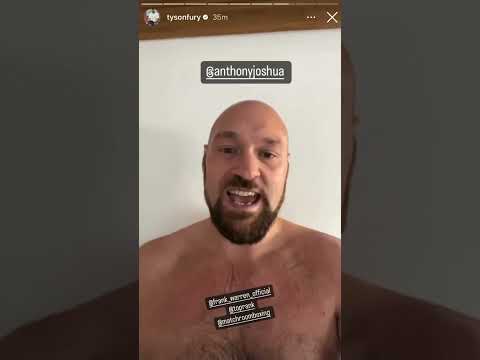