By Vince Dwriter: Recently, fans of the sweet science have been witnessing more confrontations between boxers on social media, as opposed to inside of the squared circle.

A little less than a week ago, Davis was in action as the co-feature on ESPN’s Shakur Stevenson-Robson Conceicao card. The scheduled fight between Keyshawn Davis and Omar Tienda turned into a showcase for Davis, as he systematically broke his opponent down and then ended the fight in the fifth round by way of TKO. With the dominant victory, the highly touted lightweight prospect improved his record to (6-0, 5 KOs).

Throughout the bout, Davis looked impressive against Tienda, but the way he ended the match illustrated the fact that the young boxer knows how to finish a fight when he has his opponent hurt. In the fifth round of the bout, Tienda threw a lazy jab, and Davis went over the top and caught Tienda with a counter right that knocked Tienda down.

Tienda was able to get up, and Davis proceeded to hit him with a flurry of punches that forced the referee to step in and put a halt to the contest.

Fans, boxing pundits, and Davis’s promotional company Top Rank Boxing were all impressed with the way Keyshawn Davis closed out his match against Tienda. After viewing the finish, Davis became a fan of his own work, and he posted a comparison.”Train with Bud (Terence Crawford), & now I’m starting to finish sh** like him.” Most people agree in regards to Davis ending the bout in spectacular fashion, but one boxer, in particular, isn’t enthused about Davis’s recent accomplishment.

Rolly Romero (14-1, 12 KOs) is a boxer who isn’t a stranger to confrontations, and he’s open to speaking his mind every chance he gets. Recently by way of social media, Romero criticized Top Rank Boxing’s opinion of their rising lightweight prospect. “And Top Rank saying Keyshawn is the best finisher in the sport? The f**k is this sh**.”

Davis responded to Romero by posting, “They said I’m the best prospect finisher. I already had you scared once don’t make me knock some more screws out ya head like ya last fight.” After viewing the post, Romero responded by stating Keyshawn Davis has no personality, he criticized Davis’s personal appearance, he called Andy Cruz, the man who beat Keyshawn in the Olympics, he referred to him as Davis’s daddy, and he accused ESPN of using his name to promote their fighter.

The last time Rolly Romero was in the ring was four months ago in a Showtime pay-per-view match against his stablemate and arch-rival WBA regular lightweight champion Gervonta “Tank” Davis. Romero was able to keep the fight competitive by using his jab, and he was winning some battles, but Tank Davis won the war. In the sixth round of the bout, Davis took advantage of his opponent’s aggressiveness by using movement, luring Romero into a trap, and knocking him out with a devastating left-hand counter.

Rolly Romero isn’t a stranger to social media encounters, but this specific battle could lead to the two fighters meeting in a clash that may benefit both of them. Keyshawn Davis is a young prospect who wants to take the fast track to becoming a legitimate lightweight contender, but in order to accomplish that, he needs a victory against a next-level type of opponent. Davis could very well accomplish that goal with a victory over the candid boxer Rolly Romero.

In Romero’s case, his goal is to be a pay-per-view star, and he has the personality, but he doesn’t have the resume. He received a controversial decision against Jackson Marinez, and off the strength of Tank Davis’s name, he was part of a pay-per-view main event in which he was knocked out. If Rolly Romero was able to notch an impressive victory against the rising prospect, it could aid him and bring him one step closer to achieving his goal of reaching pay-per-view status.

The world of boxing has been flooded with back-and-forth interaction between boxers on social media. If some of the Twitter battles could transition into signed matches, it would equate to some exciting events for the fans of the sport. 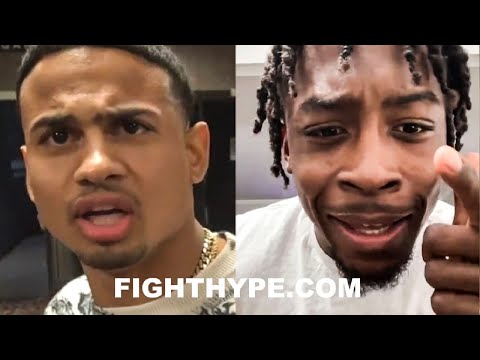