By Dan Ambrose: Caleb Plant has set a goal for himself to face Canelo Alvarez in a rematch by 2024.

Former IBF super middleweight champion Plant (21-1, 12 KOs) feels that with three consecutive victories over Anthony Dirrell, Jermall Charlo, and David Benavidez, he’ll be in a position to face Canelo for the undisputed 168-lb championship by 2024.

Plant came close to beating Canelo last November, but he ran out of gas in the later rounds, which allowed the Mexican superstar to take over the contest and score a knockout in the 11th round.

Next month, Plant will have the opportunity to display the improvements in his game when he takes on former two-time WBC 168-lb champion Anthony Dirrell (34-2-2, 25 KOs) in the chief support bout on the Deontay Wilder vs. Robert Helenius card on October 15th on FOX Sports pay-per-view at the Barclays Center in Brooklyn, New York.

This would be a good chance for Plant to show that he’s got the gas tank to fight Dirrell at a fast pace later in the fight because he’s going to need to be able to perform at a high level in the championship rounds if he wants to beat David Benavidez, Jermall Charlo, and Canelo Alvarez.

“In that fight [Canelo Alvarez], I showed that I belong at the highest levels, especially with just 21 fights,” said Caleb Plant to Fight Hub TV.

Plant fought well against Canelo through the first eight rounds, but he was fighting on fumes from the ninth round on. That’s when Canelo took over the fight, as Plant gassed out as he did in his fight with Jose Uzcategui in 2019.

Plant was lucky that Uzcategui had a lot of holes in his game because he could have lost that fight as well.

“Camp has been good. I got a lot of sparring in this camp,” said Plant. “A lot of hard training. It’s probably been my best camp yet, honestly. I’ve had the highest quality sparring, and I had the most success in sparring.

“I’m ready for October 15th to show the world what I’ve been working on. I’m obviously disappointed with the results of the fight. That’s not why I showed up. That’s not the type of performance I put on. I didn’t just come to hand my belt over.

“I’m disappointed with the outcome. I’m not here to lick my wounds and feel sorry for myself. That’s not how I’m been with anything. I just got back to work,” said Plant.

Dirrell has the punching power and skills to give Plant massive problems if he hasn’t fixed his stamina problems. If Plant fades against Dirrell, he’s going to regret taking this fight because he has the type of power that would enable him to do the same things Canelo did.

“It’s been a minute since I’ve been in the ring, but shortly after the fight, me and my dad got back to work, and me and coach Wade with correcting things, fine-tuning things, and working on things we want to get better at and continuing on with things that I’ve had a lot of success with,” said Plant.

It’s interesting that Plant doesn’t mention the things that didn’t work for him in his loss to Canelo. It was obvious that Plant gassed out, and he enabled Canelo to take control over the fight, which up until the ninth round, was a winnable one.

“I’m extremely confident,” said Plant. “I’m not deterred from becoming what I want to become just because things haven’t gone my way. That may be my first loss as a professional, but there are plenty of things that haven’t gone my way, and that hasn’t deterred me either.

“I’m still on a mission, I’m extremely confident, and I know what I bring to the table. I showed in that fight [Canelo], and I’m going to show in this fight coming up.

“I lost, but at the moment, it didn’t feel like nothing that was too crazy or too out of this world or way out of my depth or anything like that. I got caught with a shot.

“You can’t feel sorry for yourself. As Breadman said, ‘That’s one day out of 365 days.’ That was a big day. I was disappointed because I came to win. I’m not going to sit around and sulk.

“That doesn’t mean I can’t accomplish all the things I want to accomplish in boxing. S*** pops up, and people feel sorry for themselves, but that’s not how I am.

“‘The first punch he’s going to hit you with, your ribs are going to explode,'” said Plant when asked how Canelo’s power felt like. “I started feeling some of his shots, and this isn’t like.

“Obviously, the outcome, in the end, was I didn’t make it to the final bell. In the moment, some of those punches that were touching me, hit me in the arms, or when I would roll them off, and I would get caught with one here and there, it’s not like something where I was ‘Oh man, petrified.’ But in the end, he got the job done.

“By the end of 2023, I would stop Dirrell, and I would get a fight with Charlo or Benavidez and then get the fight with the other one. I would have three good wins under my belt going into 2024, looking for that rematch with Canelo.

“That’s what I really want. I want to cement my legacy as the best super middleweight of this era. I’m still looking to accomplish that, and I’m going to.

“I’m not scared of him, and I’m damn not scared of David Benavidez. I want to cement my legacy. Boxing is really important to me. I work really hard for this stuff,” said Plant. 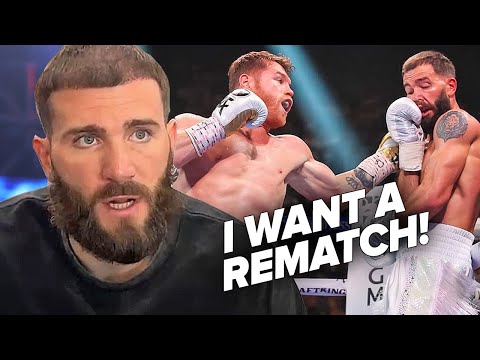