By Adam Baskin: Promoter Frank Warren is unhappy that he still hasn’t received the contract back from Eddie Hearn for the Tyson Fury vs. Anthony Joshua fight on December 3rd.

Warren says he waited until 11 pm last night for the contract to be returned to him, and nothing came. He points out that they’ve had the contract for nine days, and still nothing has happened.

Fury has a plan B option in case the negotiations for the Joshua fight fall through. Manuel Charr is believed to be one of the options for Fury. Earlier today, Eddie Hearn said that he thinks Dereck Chisora is now in the picture for Fury to fight on December 3rd.

“He’s absolutely right when he says him and George have had some positive discussions throughout. However, that’s all it’s been, discussions,” said Frank Warren to talkSPORT Boxing, talking about Eddie Hearn & the negotiations for the Tyson Fury vs. Anthony Joshua fight.

“We turned the draft around in 36 days. It’s taken them nine days. Yesterday, they said they’d get the red lines back yesterday. We sat up until eleven last night, waiting for it. Nothing came.

“Delays happened, and Tyson, it’s not that he’s putting deadlines down. I keep explaining to him, and then nothing is coming through. How do you expect him to act?

“He’s training and wants to fight on December 3rd and wants to know who he’s facing. Fighters need to know who they’re boxing. It keeps dragging on unnecessarily. It should be happening now.

“Where is the contract? Get it signed. Where’s the phone call? George has made a couple of phone calls today, and no one has called back. So what are we meant to think?

“We’re drafting a contract from a blank piece of paper, so that takes time. That was done. We sent it to them, and we got nothing back. How can that be right?

“Look, nothing is coming back from them. We’re not sitting on our backsides. Of course, we’re talking to other people. If he’s not going to sign this and be ready to go, we’re not going to scramble around. We’re going to have a plan B.

“He [Fury] wants to fight. He’s fighting on the 3rd. He’s ready for the big fight in February or March against Usyk. He’s had one fight in  a year,” said Warren about Fury. 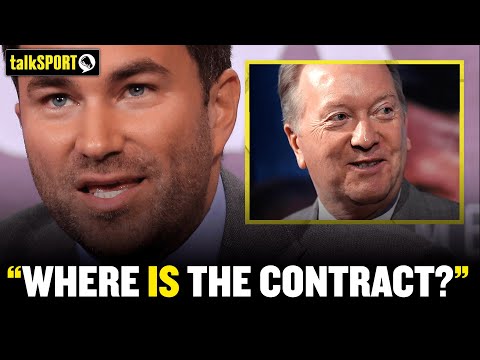 
« Conor Benn: I’m going to be hitting Eubank Jr “from all angles”