It’s unclear if Keyshawn is picking against Spence because he promotes Frank Martin, who is a nightmare that is coming after him. If Keyshawn really does believe that Crawford (38-0, 29 KOs) has got the goods to defeat Spence (28-0, 22 KOs), we’re going to find out soon if he knows what he’s talking about.

Crawford is getting old at 35, and he only fights once a year. Even then, Crawford has never fought a good 147 or 140-pounder during his career. His resume is barren of names in terms of prime-level fighters.

Good fighters like Spence and Jaron ‘Boots’ Ennis aren’t bothered by fighters that change stances 24/7. If that’s all Crawford can do, he’s going to be in for a long night when he faces Spence and Boots. You got to have more to your game than switch-hitting if you want to compete with Errol and Boots.

“I honestly always said that I feel Terence Crawford will win, even before I was on his team,” said Keyshawn Davis to Fighthype, picking Terence Crawford to defeat Errol Spence Jr on November 19th.

It’s going to be interesting to see what Keyshawn’s reaction will be if Spence beats Crawford. Will Keyshawn abandon ship and suddenly start backing Spence and pretend that he wasn’t on Crawford’s team, or will he stay true to the Omaha, Nebraska native and be ready to continue to support him as his ship is sinking after getting blown out of the water by Errol.

It doesn’t matter whether Crawford has the ability. The reality is he’s too small, too weak, and too fragile to beat Spence. Crawford is too thin-boned to deal with Spence because he’s going to get beaten up worse than Yordenis Ugas did.

“The same thing with Frank Martin and Errol,” said Keyshawn. “I feel like with Errol, we already know what he’s going to go in the ring and do. He’s going to try and go to the body a thousand of times.

“He’s going to try and use that jab. It’s like we already know what he’s going to do. But with Terence, he’s a southpaw; he’s orthodox. He can knock you out with one punch. He can beat you up and then knock you out.

“I would love for Terence Crawford to get the stoppage and both men to walk out with their heads on their shoulders, and everything is great,” said Keyshawn. 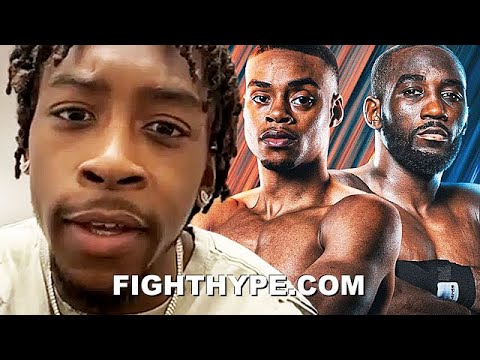