By Sean Jones: Matchroom Boxing announced that Gennadiy Golovkin would be challenging undisputed 154-lb champion Canelo Alvarez for his four belts on September 17th in their trilogy bout live on DAZN.

Many fans are giving the 40-year-old Golovkin (42-1-1, 37 KOs) a good chance of defeating Canelo, based on the Mexican star’s recent loss to Dmitry Bivol two weeks ago on May 7th.

Golovkin must follow the Bivol blueprint to the letter, and he’s an excellent chance of beating Canelo. That’ll be easier said than done because Golovkin is NOT a combination puncher.

Canelo looked like an ancient fossil in his loss to Bivol (20-0, 11 KOs), getting outworked, out-punched, and outboxed for 12 embarrassingly one-sided rounds at the T-Mobile Arena in Las Vegas. The identical scores of 115-113, 115-113, and 115-113 handed down by the three judges were terrible.

It was as if aliens from the Andromeda galaxy landed on earth & were given scorecards, hurriedly ushered into the judges’ seats, and told to score the Canelo-Bivol fight.  There’s no other way to explain the bizarre set of scores turned in by the judges.

“Let’s push ahead without going backward,” said Canelo’s trainer/manager Eddy Reynoso, making it clear that they don’t want to fight Bivol in an immediate rematch, which would be viewed as “going backward.” “A Mexican never surrenders; let’s push forward.”

It might not be surrendering that Canelo is doing by choosing NOT to attempt to avenge his loss to Bivol, but it sure does make him look less than courageous.

When you lose a battle in a war, you come again with a counterattack when you’ve studied your enemy. We see here a full-scale retreat by Canelo in going after a perceived lesser target in the soon-to-be 41-year-old Golovkin.

The way Canelo looked against Bivol was that of a fighter well into his 40s and no longer capable of throwing more than a small handful of punches in each round.

Based on that performance from Canelo, Golovkin might be the younger fighter of the two, and he’s got an excellent chance of winning if he lets his hands go the way Bivol did.

While some fans have downgraded Golovkin based on his age & his recent string of lackluster performances in his last four fights, the 31-year-old Canelo looked just as old in his loss to WBA light heavyweight champion Bivol (20-0, 11 KOs) on May 7th.

“These are two men that bitterly dislike each other and want to end this incredible series with a blistering KO,” said Eddie Hearn about Canelo & Golovkin.

It’s hard to know why Canelo would “dislike” Golovkin so much, considering he’s not the one that got shafted with the scoring in their two fights.

If anything, Canelo should view Golovkin as an old friend, seeing how he made so much money fighting him.

“I truly believe this will be the most thrilling fight between these two great champions, and it will be fireworks from the first bell to the last man standing,” Hearn said about the Canelo vs. GGG trilogy. 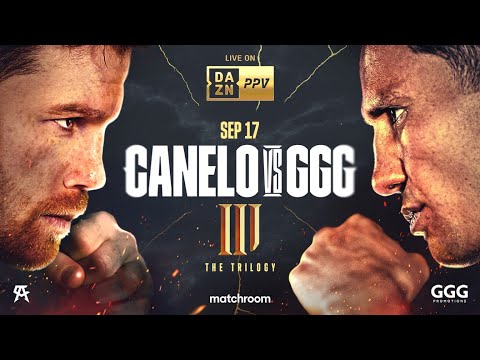