By Craig Daly: Eddie Hearn says Dmitry Bivol could move down to 168 to challenge Canelo Alvarez for his undisputed super middleweight championship.

Ultimately, it could come down to what Canelo (58-2-2, 39 KOs) prefers for the weight for his rematch with Bivol. Canelo recently said that he would want the rematch with Bivol to take place at 175 rather than 168, which makes sense.

If Bivol comes down to 168 and defeats Canelo in a battle for his undisputed crown, it would leave him belt-less, and he’d look bad losing to the talented Russian at super middleweight.

There’s less of an excuse Canelo could give his fans if he were to get beaten at 168 by Bivol. Canelo couldn’t blame the loss on being smaller than Bivol because with him coming down to 168, the only advantage he’d have over Canelo is height & reach.

Bivol is a combination puncher with excellent movement, power, and stamina. He’s basically kryptonite for Canelo, who fell apart against him last May with Bivol fighting in second gear the entire time.

If you were to create a fighter from scratch to defeat Canelo, you would come up with Bivol. He’s designed to defeat a fighter like Canelo and make it look easy.

Had Bivol shifted gears into third and forth, he likely would have stopped Canelo.

When Bivol unloaded with a seven-punch combination on Canelo when he was backed against the ropes in the fifth, he looked like he could have finished him.

After throwing all those punches, Bivol was barely breathing and looked like he could have come back with a longer barrage that would have forced the referee to step in to save Canelo.

Interestingly, Canelo is rooting for Gilberto Ramirez to defeat Bivol on November 5th because he wants to back his fellow Mexican fighter.

However, it doesn’t look like Ramirez will be able to take care of Canelo’s problem for him against Bivol because he’s too slow at 175.

Ramirez was a good fighter at 168, but he’s gained a lot of weight since moving up to 175, and he’s becoming incredibly slow.

Ramirez’s lack of speed is going to put him at a huge disadvantage against Bivol, and he’s likely to be easily beaten by a one-sided decision.

“Yeah, close on the scorecards. I didn’t score it that way, but one round difference is a draw,” said Eddie Hearn to Matchroom Boxing about the scores for the trilogy fight between Canelo Alvarez and Gennadiy Golovkin last Saturday night.

“Dmitry Bivol is the target. Obviously, he’ll want to avenge that defeat, but Bivol has a very tough fight against Zurdo Ramirez on November 5th.

“We’ll have to see if he gets through that, but I think for Canelo Alvarez, that’ll always be in the back of his mind to see if he can avenge that defeat.

“I don’t think that Canelo Alvarez is looking at 175 as a division that he wants to necessarily go back to and win belts, but he wants Zurdo Ramirez to beat Bivol for Mexico, but he also wants Bivol to win so he can get a chance to rematch him.

“Don’t rule out the possibility of Bivol moving down to 168 to challenge for the undisputed title because he wants to do that as well. We have to see, but November 5th in Abu Dhabi is a very important date for the diary in the division.

“It was packed in there tonight, and the atmosphere was incredible. Alejandro Fernandez was there singing. It was an amazing experience.

“Two greats [Canelo & Golovkin], and some great fights on the undercard as well. It was great to see Canelo get a victory.

“Gennadiy will be kicking himself for the slow start. Canelo was outstanding in the first half of the fight. People talk about it being a slow start from Gennadiy, but Canelo’s movement was unbelievable.

“It frustrated Gennadiy Golovkin, who came into the fight on the back end. He landed a good shot, Canelo Alvarez. It looks like he broke his left hand, but I thought it was a deserved winner.

“I had it probably 9-3, something like that. Gennadiy finished the fight strongly, but there was too much damage done by Canelo Alvarez in the first half of the fight.

“He’s probably not the fighter he was four, five, six years ago, but few are when they reach that stage in their career,” Hearn said about Golovkin. “But he boxed extremely well in the back half of the fight.

“Just in the first half of the fight, Canelo’s movement was too good. I hardly gave Gennadiy Golovkin a round in the first six rounds. When he did get into the fight, he looked dangerous.

“He was forcing the pace. By then, there were too many rounds in the bank [for Canelo]. So, yeah, sure, Gennadiy Golovkin isn’t in his complete prime anymore, but you can’t take away from the quality of Canelo Alvarez.

“His movement was fantastic, and he was the deserved winner. Yeah, great. That’s always important in boxing. They embraced after the first and second fight as well, but there was still some stuff said.

“It all depends on interviews that come in the future. They’re too classy guys, too legends of the sport, and they always give it their all.

“I don’t know,” said Hearn when asked what Golovkin should do now. “There will be a lot of people saying that Golovkin is coming to the end of his career, but he did just stop [Ryota] Murata in Japan to unify the [160-lb] division.

“So, you’re talking about him fighting the brilliance of Canelo Alvarez. Can he come back and unify the division again or become undisputed middleweight, or will that be the end of the road for Gennadiy Golovkin?

“That’s obviously up to him and his family to decide what’s next,” Hearn said about GGG.

“Yeah, I think that hand has been bothering him [Canelo] for a while now. Whether it’s broken or not, that’s the talk, and it may require surgery. Obviously, we’re in September. It’s very unlikely that he’ll box again until May.

“It was a good performance. He boxed a little bit more than I expected him to, and I think that frustrated Rosado,” said Hearn about super middleweight contender Ali Akhmedov’s one-sided 10 round unanimous decision win over Gabe Rosado, who came on late in the fight.

“It was a good victory. I think it’s three wins for Ali Akhmedov coming off the Gongora defeat. Look, Rosado wins some and loses some. I’m sure he’ll be back.

“I still had it very close at the end,” Hearn said about the Ammo Williams vs. Kieron Conway fight. “Maybe Ammo was slightly lucky to get a decision. I think Kieron needed to do more. That’s something in these fights.

“Against Souleymane Cissokho, and tonight, he had the opportunity to do more and try and win that fight. Ammo is possibly a little lucky tonight. I think a draw would be fairer to both, but the knockdown was a massive turning point in the fight.

“[Diego] Pacheco was outstanding. Marc Castro was outstanding as well. Shoutout to Aaron Aponte and Fernando Molina. That was an incredible fight, and both of those guys putting their undefeated record on the line,” said Hearn. 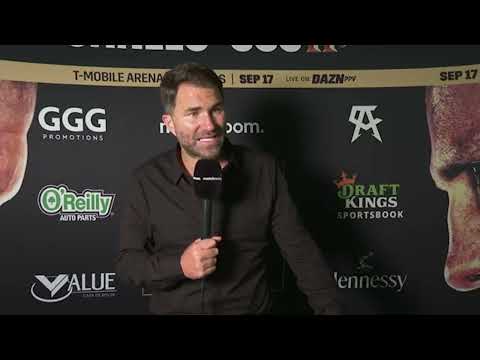