De La Hoya further said that the 40-year-old Golovkin (42-2-1, 37 KOs) looked really “old” and that Canelo doesn’t measure up to that of Bernard Hopkins.

There’s no disputing that Golovkin looked ancient inside the ring and fought like he was operating at only 20% of the fighter he used to be during the zenith of his career.

With Golovkin functioning at a greatly reduced level, it made Canelo’s job much easier, as he was able to build a huge lead in the first seven rounds.

Once Canelo had an insurmountable lead, he coasted in rounds eight through twelve, likely knowing that Golovkin wouldn’t be able to make up the difference. It was close, though, as the judges scored it 116-112, 115-113, and 115-113.

“The truth is everyone is afraid of speaking the truth. The fight [Canelo-Golovkin] was a f**** dud. GGG was old as f***, and Canelo can’t hold Hopkins’ jockstrap,” said Oscar De La Hoya on social media.

I feel good. I feel fast; I feel strong. I think I had a good jab in the eight and nine rounds. Then he came on strong in the later rounds, but I’m there too. I’m happy with what I did in the ring.

“Yes, maybe,” said Canelo when asked if he was going to have a few tequilas. It’s good. I need the surgery soon,” Canelo said about his injured left hand.

“I can win that fight, no problem,” said Canelo about his potential rematch against Dmitry Bivol in 2023. “He needs to take care of business with [Gilberto ‘Zurdo’ Ramirez. I want Ramirez to win. I wish for Ramirez to win. We’ll see.

“You need to be an example for them, and I think I’m a really good example. I know the things that I don’t need to do. I need to have surgery on my hand, so I have that issue for that fight [with Golovkin].

“I feel great, I feel happy. I did my best out there, and I’m happy,” said Canelo Alvarez to Matchroom Boxing following his win over Gennadiy Golovkin. “Look,  I try my best in everything. In a father too.”

Canelo always had this fight in his back pocket. Not impressive. Benavidez is the real test at 168 not a 40 year old GGG.

Canelo ain’t playin possum. That boy suckin air. I don’t know if this fight is going to get any more exciting or just go as is. #CaneloGGG3 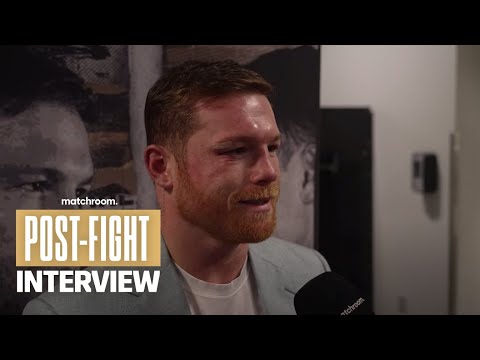