Keyshawn Davis tells Haney that “Shakur about too whoop your a**”

By Sam Volz: Keyshawn Davis wants to know why Devin Haney is so angry about him being happy that Shakur Stevenson is about to “whoop his a**” once he moves up to 135.

Davis feels that Haney’s reaction to him being gleeful about Shakur coming for him is a sign that he’s “scared.”

Haney wonders why the 23-year-old Keyshawn doesn’t say it himself because he’s the same age and fights in the same weight class as him.

Obviously, Keyshawn lacks the experience to be sharing the ring with Haney, so he wisely keeps quiet right now rather than calling him out like Stevenson is doing.

I ain’t never seen a nigga like Keyshawn he so happy that Shakur said he a fight me… he was ready to jump on his back 😂😭Nigga I’m yo same age & weight Nigga you say it!

“Devin, I don’t really even know you. So why are you so mad at me being happy about my brother? I feel like he [Haney] knows Shakur is a threat. So when I really started putting them in a mix and started hyping it up, he don’t like that. It scares him.

“So you start beefing with me. The guy that you probably think you could beat because I’m only 6-0, but you still don’t mention Shakur’s name, even with all these arguments going on, but the whole time, that’s the guy that called you out.

“Shakur was sitting there laughing at you, looking at me. So who is new? I’m in the background. I don’t say nothing. Since now you want to call me b***hes and all this. It’s a different level now.

“Y’all done f**** up. Him and Tank, for sure,” said Keyshawn when asked if Haney is the best fighter at 135. “I feel like skillfully in talent, I feel like Tank is the best right now if you want to be real.

“I feel like Tank has all the skills, all the ability. I feel like it’s really Tank, for real, for real,” said Davis. 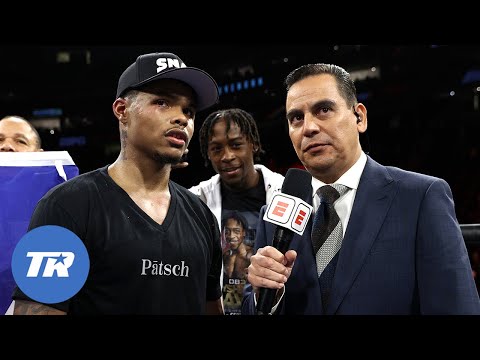 
« Did Team Joshua intentionally sit on contract for Fury fight?