Devin Haney on his way to Australia to beat Kambosos again

By Sean Jones: Devin Haney is flying over to Melbourne, Australia, to defend his undisputed lightweight championship against former unified 135-lb champion George Kambosos Jr on October 16th at the Rod Laver Arena.

The outcome is a foregone conclusion. Haney is a huge favorite, and he’s likely to beat the badly over-matched Kambosos even worse than he did last June in Melbourne.

If Kambosos had punching power, he’d have at least a puncher’s chance of winning, but unfortunately, he’s a finesse fighter and has no avenue of beating Haney.

For Kambosos Jr (20-1, 10 KOs), this is his last chance to get his hands on those “beautiful belts.” If Kambosos Jr loses the rematch with Haney, it’s believed that he’ll retire from boxing.

After all the bragging that Kambosos did before his last fight with Haney, it’s hard to imagine him hanging up his gloves if he gets dominated on October 16th, but that’s what we’re looking at.

Haney has bigger problems on the horizon than Kambosos, as Shakur Stevenson is moving up to 135, and he’s going to be installed as the #1 for his WBO belt.

Moreover, Top Rank wants to match former three-division world champion Vasyl Lomachenko against Haney in his next fight after he defeats Kambosos. Lomachenko will be a real nightmare for Haney, and he might be a step too far for the 23-year-old.

But if Haney does get past Lomachenko, he’ll immediately need to defend his belts against former two-division world champion Shakur (19-0, 9 KOs), and that’s going to be every bit as tough a fight as the Lomachenko. 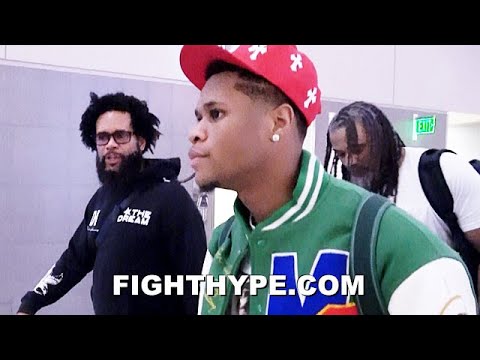 Haney is basically going to be running the gauntlet with his back-to-back fights against Lomachenko and Shakur Stevenson. If Haney chooses to avoid those fights by fleeing to 140, he’s going to be looking like he’s ducking, and the boxing public is going to ridicule him without end.

“Devin Haney,” said Richardson Hitchins to YSM Sports Media when asked who does he want to see Shakur Stevenson fight at 135.

“I think if Devin Haney move up [to 140] because he’s got two big fights now. He’s got Shakur Stevenson and Lomachenko.

“If he moves up, he’s kind of like, I want to say, he’s ducking that competition if he moves up in my opinion. I think he has some big money fights right now. Tank too. So if they want to make it happen, they can,” said Hitchins.