By Dan Ambrose: Ryan Garcia says he walked up on Gervonta ‘Tank’ Davis at a club, and he grabbed his chain. Ryan says he wasn’t worried because security was there, and he felt that Tank wouldn’t have been able to take his chain.

When Ryan was re-telling the story, he looked visibly upset, and you could tell that he was bothered by Tank grabbing his chain.

There have been too many things said by Ryan on social media and in interviews for him to walk up to Tank Davis and expect him to be friendly.

Ryan should consider himself lucky that Tank didn’t belt him because it sounds like he’s had enough of him constantly calling him out. At this point, it doesn’t look like Ryan and Tank will be fighting this year. If the match were going to happen, we would have heard something already.

Ryan’s promoter Oscar De La Hoya has repeatedly said that he can’t get a hold of Tank’s management to start negotiating.

“I could fight anybody, but I want the mega-events,” said Ryan Garcia on social media. ‘When is your next fight?’ You’ll see soon.

“What’s funny, guys? I actually did see Tank in the club. He’s a tough guy. He’s very low-key in his hoodie. I went up to his table with me and this guy, and we said, ‘Yo, are we going to make this fight happen?’

“Then he grabbed my chain, but I wasn’t worried about it. There are so many security guards there. I knew he wasn’t going to take my chain or do anything. He just wanted to seem tough. So I said, ‘Wow, it’s like that, huh?’

“Then he responded again, ‘Yeah, it’s like that.’ Then he let go. He had to let go. Then I said something to him. She knows what I said. I’m not going to repeat it on live. Just know in the fight, that’s where it really happens.

“Outside the ring, you can act tough all you want. Inside the ring, it all changes. It definitely does. I’m not with acting tough. I only act tough when I need to be. I don’t need to flaunt that.

“It wouldn’t even be entertaining. The most entertaining thing about that fight is the build-up, maybe. Not the actual fight. I haven’t been doing my Instagram stuff. I did that, and now I’m ready to make a mega-fight. That’s what I’m focused on, making a mega-fight. 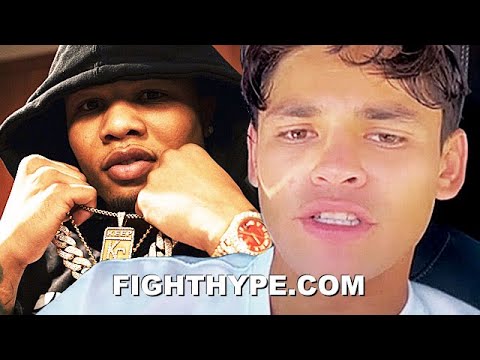 
« Devin Haney on his way to Australia to beat Kambosos again