By Brian Webber: Canelo Alvarez insists that he’s learned his lesson from his recent loss to Dmitry Bivol, and he says he’s “fixed” the flaws.

The way Canelo (57-2-2, 39 KOs) talks, his defeat was a product of an injury rather than from something he did wrong inside the ring. It’s unclear what kind of injury that Canelo had that would cause him to tire so quickly against Bivol.

To be sure, Canelo can’t afford to make the same mistake in his September 17th trilogy against Gennadiy Golovkin or in his possible rematch with WBA light heavyweight champion Bivol next May.

It didn’t appear that Canelo was injured during the fight, but only he knew what was going on with his body. If it was an injury, he did a good job of hiding it during the fight.

Golovkin (41-1-1, 37 KOs) is going to use Canelo’s loss to Bivol as a blueprint for how to beat him. Bivol used jabbing and throwing combinations. He also did a good job of staying at range to limit the opportunities Canelo had in landing his shots.

“I enjoy boxing. So I enjoy here, and I can’t wait to be in the ring again,” said Canelo Alvarez to Fighthype. “You learn in everything, win, loss. I think I learned my lesson.

“Other things happened in training camp, so I fixed it,” Canelo continued. “I fixed it for this fight [against Gennadiy Golovkin]. I learn from everything.

“I think so,” said Canelo when asked if he’ll learn a lot from his loss to Bivol. “You’re going to see, very dangerous, yeah.”

“Will he need to go to a toe-to-toe battle? I’m not looking for that, but if that happens, I think he’ll oblige whatever he needs to do to win the fight,” said Golovkin’s trainer Johnathon Banks to Teddy Atlas on The Fight. “I’m looking for a beautiful night of boxing for GGG.”

“It’s not easy taking over a very successful and experienced fighter like Golovkin,” said Atlas. “I actually felt in your first fight together against Steve Rolls, who was 19-0 at the time, Golovkin showed actual improvement in some areas, which is not easy to do.

“You know the saying, ‘You can’t teach an old dog new tricks.’ To me, I saw improvement. Since taking over the reins of his training, what has been your focus with this obviously very accomplished fighter?”

“The focus for me is something I was taught by my mentor, the late Emanuel Steward, about the timing and the rhythm,” said Banks. “Ray Robinson once said that everything has a rhythm to it, like a heartbeat.

“Fighters need to have a rhythm. Everything has a rhythm to it. That was the premise of the teaching that we earned down at the Kronk Gym, down in that basement, was having a rhythm. Not just walking up to someone flat-footed, looking for a knockout.

“The rhythm is very important. This is what I want to get to and stick to. I want this young man to find his rhythm. We can start off with mine, but with me giving you mine, we got to find yours.

“Once you find your rhythm, then you can start letting your hands go at a pace where you’re not going to get tired because this is all off your rhythm,” said Banks.

“You mentioned the great Emanuel, and you mentioned the Kronk. I just have to throw in one quick think that I have to ask all the people out there that really know boxing,” said Atlas.

“Was the Kronk [gym] really kept as hot as everybody says?”

“What was the reason? I know as a trainer that I can guess, but for the people out there, it’s to lose weight, but it’s to overcome and be in a difficult environment, which we are in the ring. I would think that’s part of it,” said Atlas.

“That’s a lot of it because it’s to a point where you want to make your uncomfortableness comfortable,” said Banks about the high temperatures of the Kronk Gym.

“Sometimes, when you perform in extreme heat, you get tired faster, or you don’t punch as hard, or you don’t go after your opponent as much. But once you’re used to the heat, it’s like a regular day to you.

“You could fight your fight. You don’t have to focus on the heat. Now you can focus on your opponent. The heat was the first thing you had to overcome. Once you overcame that, it was greatness waiting for you after that,” said Banks.

“In this business, we understand the physicality of it, the talent, we understand that,” said Atlas. “But I always talk about it being 75% mental. Would you concur with that, and before you even answer it, a lot of people need to remember that you were a hell of a fighter.

“You were really a good fighter. You were a good solid, technical, complete fighter at cruiserweight,” Atlas continued. “Is boxing 75% mental?”

“I agree with you on that,” said Banks. “Once you realize all your obstacles are behind you, and the only one in front of you is your opponent, that makes the fight easy.

“When we talk about the hotness in the gym, that was an obstacle a lot of guys had to overcome. Once they overcame that a lot of these big fights going on, they leaving the basement and going to Ceasar’s Palace in Vegas and fighting outside.

“That was extreme heat. Plus, they had the TV lights, which made it even hotter. So, therefore, that was an obstacle they didn’t have to worry about anymore.

“Learning to be comfortable in an uncomfortable environment,” said Atlas. “That’s our world; that’s the world of a prizefighter. In Golovkin’s first fight with Canelo, he pressed the action. In the rematch, he boxed more.

“As much as you can tell us, what’s your strategy for this third fight?” said Atlas.

“Honestly, I’m looking at him [Golovkin] boxing him [Canelo] and pressuring him at the same time,” said Banks. “Every night, I look at both [Canelo-Golovkin] fights, not on the computer but mentally.

“It doesn’t matter who you are. Everybody acts differently when you start putting pressure on them. Whether you force them to become something else and they fight or whether they reveal who they really are. I don’t know.

“That’s why every punch is calculated and why he starts walking guys down. He’s going to take, take, take, and you’re going to be there to land something,” said Banks.

“What you just said, Johnathon, sounds exactly what Bivol did to him,” said Atlas. “Obviously, you watched the Bivol fight. What are you taking from that fight?”

“It’s hard to take a lot from that fight because I think what Bivol did, I honestly thought G did in the first fight,” said Banks. “He just didn’t get the decision.”

“I agree, he should have won that fight,” said Atlas about Golovkin deserving the win in the first fight against Canelo. “I thought he won both fights, but go ahead.”

“Up until the Bivol fight, every decision, whether close or a gap, went to Canelo,” said Banks. “Now he got a decision that didn’t go his way. That’s what’s making this fight a little intense because Canelo now feels he needs a knockout to win.

“To answer your question, I would G to start off boxing; that’s what I would like because I think he’s good at doing that.” 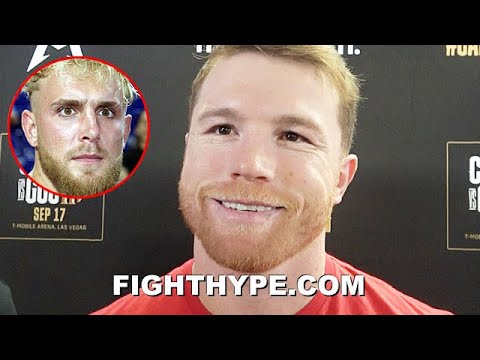