By Jack Tiernan: Tyson Fury’s co-promoter Frank Warren says they’ve sent the contracts out to Anthony Joshua on Friday for a December 3rd fight in the UK.

Now it’s going to take time for Team Joshua to go through the contract before it’s eventually signed.

As long as everything is to Joshua and his team’s liking for the contract, the contract will be signed, and the mega-fight between him and WBC heavyweight champion Fury will be battling it out on December 3rd in Cardiff, Wales.

“The contracts have been sent to Anthony Joshua’s team. They will have arrived on Friday morning,” said Frank Warren to the Dailystar.

“Now we wait for them to go through them and sign so we can get one of British boxing’s biggest events on.”

The split for the fight is 60-40 in Fury’s favor, with a 50-50 split for the rematch clause. Joshua (24-3, 22 KOs) is taking a big risk facing Fury off the back of consecutive losses to Oleksandr Usyk.

“Probably not. I think that if we were honest and we had our plan already in place following the defeat, which was to come back in December with a top 15 guy. Have a couple of wins and get the confidence, gel with the training team,” said Eddie Hearn to Secondsout when asked if Tyson Fury was the best fight for Anthony Joshua to take, given that he’s coming off a loss to Oleksandr Usyk.

“It could be,” said Hearn when asked if this is a bluff on Fury’s part. All the meetings I’ve had with George Warren, they assure me that it’s not. So I have to go along those lines. I just don’t believe Tyson Fury, and the track record gives me the reason not to.

“Also, Anthony is a guy who wanted to fight Tyson Fury for a long time, and he sees this as his opportunity to ever fight him. So he thought about it very carefully, and he wanted to take on the challenge. 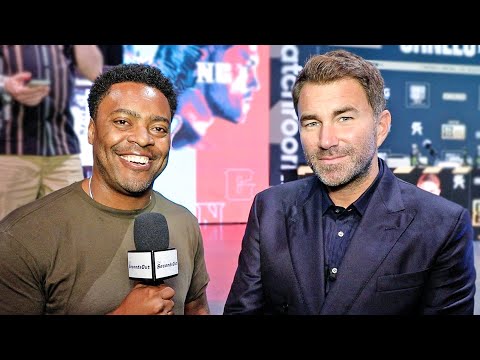 “There were no robberies” in Canelo vs. Golovkin 1 & 2 says Eddie Hearn »