By Craig Daly: Oscar De La Hoya insists that Vergil Ortiz Jr will be ready to step in as a replacement opponent if the Errol Spence Jr vs. Terence Crawford fight fails to get made this year.

In the meantime, Ortiz fights tonight in a 12-round headliner on DAZN against Michael McKinson (22-0, 2 KOs) on DAZN at the Dickies Arena, Fort Worth, Texas.

“Sure, anything is possible. Either way, whoever falls off [Crawford or Spence], we’re [Ortiz Jr] ready to step in; that’s the bottom line,” said Oscar De La Hoya to FightNews about Vergil  Ortiz Jr. being willing to step in as the replacement opponent to fight Errol Spence Jr or Terence Crawford.

“Against Crawford or Spence. I remember Ortiz telling Jerry Jones that ‘Sooner or later, I’m going to fill up this stadium for you, this Dallas Cowboy’s Stadium.’ If a Spence fight happens against Vergil Ortiz, that’s exactly what’s going to happen. We’ll fill up the stadium.

“Do dreams come true in America, absolutely? Vergil got sick in his last outing when he was supposed to fight McKinson. Then there’s a problem of fighters not wanting to fight Vergil. That’s God’s honest truth.

“We have plans where we can take Vergil and force him to fight everybody by being the mandatory and by forcing him through the WBA, WBC, IBF, WBO. You just got to force them. That’s it and fight. That’s what Vergil does. Fight.

“Eventually, the champions have to face him. There’s no running away from Vergil. So that’s the route we’re going to take. He’s almost there. He’s #1 in the world with everybody. So once Crawford and Spence fight, then Vergil gets the winner.

“I would put it together in a heartbeat,” said De La Hoya when asked if he would let Ortiz Jr fight Crawford if the Spence fight failed to happen.

“I love that fight. It’s probably the best fight in the welterweight division in recent years. It’s a tough fight. I love Crawford. I have amazing things to say about him. He’s a great champion, but Vergil Ortiz is my guy. 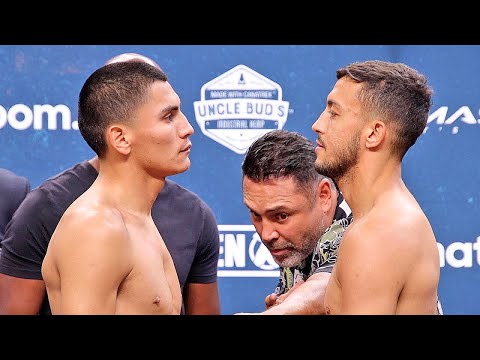